There’s nothing awkward about The Awkward Silence.

The Awkward Silence are a musical comedy sketch duo who performed their show at the Gilded Balloon Teviot Balcony.

The Awkward Silence’s Big Break is a story as old as time. Deadbeat dad, unforgiving son, the inability to communicate; it practically writes itself. Although, I don’t know many of these stories that end with the father and son in prison together and have everyone break out into a musical number every five minutes. But that just made it all the more fun to watch. Think Les Mis' meets Oliver (I got strong Fagin vibes from the taller half of the duo). It had 100x less production value but just as much spirit.

The Awkward Silence's Big Break was a great show, very enjoyable with some really catchy numbers. One thing I’m noticing at this year’s fringe is the dynamic between the comedy duos. They all feel very authentic, and I don’t know if it’s because everyone missed each other over Covid, but it’s added another dimension to their shows, and The Awkward Silence is no different.

There is nothing Awkward however, about the way these two perform on stage together. They fed off one another’s energy and performed in unison for most of the show. A few stumbles here and there, but hey, prisoners are humans too so mistakes are allowed.

The way the two switched between characters without costume changes, silly masks and cheap gimmicks was my favourite thing about the show. The way they used their bodies and mannerisms to transform from one character to the next was really inspired.

You can catch The Awkward Silence’s Big Break most days at The Gilded Balloon Teviot (Balcony) at 14:20. 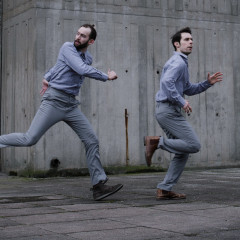 There’s nothing awkward about The Awkward Silence.