Across the political spectrum, Rosie Holt’s debut show finds hypocrisy in all the crevices with satirical character comedy

You just don’t enter many shows to ‘Boss Bitch’ by Doja Cat. That is the campaign song of Rosie Holt (the politician) gearing up for a three-legged race with Rishi Sunak and Liz Truss. Enter right-wing journalist Harriet Langley-Swindon, tyrannical in cancelling cancel culture, TV presenter Kirstie Allsopp, a woke left-winger terrified of getting it wrong, and some Russell Brand-esque influenced character – and then there’s Rosie Holt (the comedian). In Holt’s character comedy show The Woman’s Hour, there is a complicated soup of character comedy, to say the least.

The Woman’s Hour is an ambitious yet frantic show, but Rosie Holt just manages to pull it off with her energetic performance. Holt is at ease with character comedy, it is her bread and butter after all. The internet sensation sometimes rakes up millions of views for her entertaining political spoofs, and she doesn’t fail to deliver at the Edinburgh Fringe Festival with some familiar appearances.

In Holt’s show, we get a glimpse at her impression of Liz Truss which is truly magnificent. Holt highlights the dichotomy of how politicians used to speak versus how they currently do, suggesting that there’s some right-swing public speaking suppression plaguing potential political leaders. It is sharp and smart, playing off the audience's understanding of the political landscape of today.

Where the show falls short is in the latter half, it becomes increasingly confusing to navigate the characters as the show begins to quicken its pace. There are strong, well-written characters in The Woman’s Hour, but it is not the case for all characters, including one where Holt explains her choice to play out the wife of a politician who happens to be French. Another out-of-the-blue choice was a Russell Brand impression that relied very heavily on a repeated gag that garnered some laughs but wasn’t as impressive as her collection of other characters.

Rosie Holt explores the ridiculousness across the political spectrum with absolute ease through her satirical interpretations, and there are some great characters highlighted. Rosie Holt’s character (of the same name) is a right-wing politician attempting to defend a failing government. Then there’s a leftist character, interacting with audience members in a bid to navigate not getting cancelled by attempting to catch others out. Matching how well-written her character comedy is, Holt has some pretty great one-liners, for example, asking if anyone in the audience is left-wing and whether that meant “picket line left-wing, or reads The Guardian long read but won’t pay them left-wing”.

The Woman’s Hour is a wonderful whirlwind of an hour full of satire and political poking from all directions, it just has a tendency to lose sight of the direction it’s going in at times. A strong and stable debut. 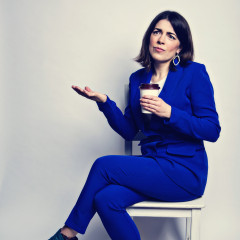 Across the political spectrum, Rosie Holt’s debut show finds hypocrisy in all the crevices with satirical character comedy