"Criss Cross, my heart hope to die," global pop star Shab delivers another addition to her successful growing discography. 'Criss Cross' is an exceptional follow-up to her previous single featuring The Martinez Twins 'Music To My Heart.'

Persian/American singer/songwriter Shab has done an unbelievable job of mastering the translation of her emotional whereabouts into musical soundscapes in her second language. Shab's success has factual evidence as she released three consecutive #2 hits on Music Week's Commercial Pop chart in the UK.

Steered by Grammy-winning producer Damon Sharpe, Shab establishes her signature sound of sensual dance-pop with each release. For the accompanying 'Criss Cross' music video, Shab performs out of Alice In Wonderland's alternative universe where time does not exist including five costume changes.

'Criss Cross' is infectious, vibrant, and electrifying, incorporating heart-fluttering lyrics, with millions of people already tuned in on Youtube. At this rate, Shab's unstoppable charisma will take over the world. 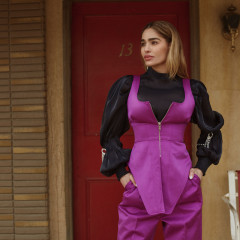