“It doesn’t matter how we say it, you’ll find a way not to listen”.

I was half expecting a labour room for this accidental anarchist birth – perhaps a lefty midwife in the corner or maybe even one of those communist blow up pools to paddle in. Instead, the stage was listed as a chaotic instrument room in an oil rig, jilted in the ocean and isolated from all reasonable contact.

The show followed a fortuitous hostage situation, with a knocked-out captain cable-tied to an office chair all in the name of the climate emergency. Two novice protesters named Alice and Lia are responsible for the stunt, nervously assessing an equally unimpressed captain heading up the oil rig. After some thought, and trouble with the recovery position, engineer and protester Lia shouts rather feebly: “there is no emergency code for assault!”. Alice couldn’t contribute much to the rescue effort either, having left all necessary comms elsewhere. After all, “it was a no phone evening” – a more domestic, but just as pressing issue.

It’s safe to say I didn’t expect my second favourite character to be off stage. Dan the assumed technician was relegated to the walkie talkie, a charming voice of reason, and provider of pizza. He added a humorous dimension to the performance, contributing to an excellent audio and visual technical delivery behind the scenes.

I wasn’t just glued to the proverbial building in protest, I was instead glued to the stage, witnessing a frankly brilliant performance from Alice, the neurotic novice anarchist with a penchant for planning and a stunning cream cable knit. Her commitment to revolt was admirable, with even a stoic captain unable to resist their siren call for change, boycotting a different kind of (oily) uprising. Their message rang out loud and clear, culminating in a touching reconciliation across the big red button.

Get your tickets to An Accidental Birth of an Anarchist here. 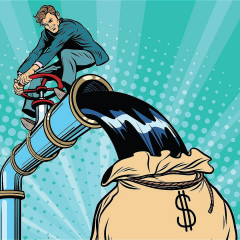 Review: Accidental Birth of an Anarchist

“It doesn’t matter how we say it, you’ll find a way not to listen”.