After weeks and weeks of listening and seeing clips and songs from Encanto, and weeks of pestering our dad and step mum (Sarah), they finally relented to letting me and my sisters watch Encanto! Encanto is a musical film that was released in US and Canadian theaters on 24 November and a month later on Disney+ on Christmas Eve.

Encanto is a Latin-American film that tells the story of a teenage Columbian girl in a family full of miracles. The Madrigal family received an Encanto in the form of a candle. When each family member younger than Abuela turned 5, they received a gift that they could use to help the village, and they received this gift by touching a doorknob, however Mirabel didn’t receive a gift, and therefore is treated differently by the rest of the family.

My favourite characters are a tie between Bruno Madrigal, Antonio Madrigal, and Isabela Madrigal

I love these three characters because I feel like Antonio reminds me so much of my little brother Isaac and he’s also really cute and innocent but mischievous at the same time. Next, I love Bruno also because I think that you would be a bit wary around him when you first meet him, but then once you got to know him he would be fun and nice to be around, which coincidentally is how people describe me 😂and finally my other favourite character is Isabela, because I like the way that she is shown to get braver and more outgoing the more the film goes on.

I personally loved the film, and all the songs, but I think that my favourite song is We Don’t Talk About Bruno. This song has a really catchy rhythm, and also explains multiple reasons as to why the villagers and the Family don’t seem to like Bruno. This opinion is clearly shared with me by many people, as when the soundtrack became very popular, “We Don’t Talk About Bruno” reaching number four on the Billboards Hot 100.

However, some people didn’t like the film as much as others and I did and one review, written by The Guardians' Perter Bradshaw says that “ Encanto feels like it is aspiring to be exactly that sort of bland frictionless perfection that the film itself is solemnly preaching against” and many others also used the word frictionless in their own reviews. However, for all the bad reviews, there are so many good reviews, one person saying “A smiling tale about familial reconciliation and learning to see your relatives for who they are rather than who you wish they were is never unwelcome”.

In conclusion, I think that if you want a family friendly film that will be both entertaining for all the family, then Encanto is definitely the film for you. A combination of stunning visuals and incredible songs, the story will pull you in by every heartstring available. 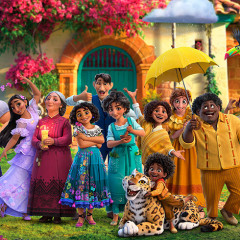