The Oxford six piece have received critical acclaim after the release of their debut album Deep Down Happy. They are known for their glam rock characteristics but this hasn't come without criticism. Many have said that due to the band’s Oxford education they've failed to acknowledge their privilege in a time where social commentary has been revived.

This show however had lots of energy, but did feel slightly confusing at times. Maybe that’s due to the lack of live performances opportunities over the last two years, or perhaps it’s because Sports Team don't really know who they are yet. The band played a plethora of tracks from their debut as well as a sprinkling of some new tracks from their upcoming album ‘Gulp!’.

Opening with ‘Here It Comes Again’ in a beige sequined suit, charismatic frontman Alex Rice brings power alongside a posh accent and fresh guitar melodies. Whilst the crowd didn't seem too bothered by the bands presence, it was clear early on that the ones who knew the songs resided in the front row.

The band went on to play new track ‘The Game’. It seems the new album may have a foot in familiarity as the track had a very similar soundscape to older tracks. As well as this they also played ‘R Entertainment’ to which Alex joked that the track wasn't their best so it begs the question as to whether they actually like their new material themselves.

‘The Races’ inspired audience interaction just before, and this is where the dynamic of Sports Team comes into play. Whilst it's a relatively small crowd, it's definitely not one to be sniffed at. Whilst they may have the boisterous guitar led athems, charismatically they behave like a small band. Interacting with the crowd in a close proximity does give them an edge for this show at least. The song itself did however raise the energy of the crowd as a whole.

Although they definitely took some warming up, the crowd were becoming much more receptive. ‘Camel Crew’ was a shining example of this, with mosh pits in the centre of the crowd and much more dancing. The track itself has a certain chilled fluidity that glamorises the mundane life of musicians in London. It boasts glitzy, softened melodies and a laid back vocal performance.

‘M5’ revived the Blondie style aesthetic with a verse of ‘woah woah’ (not the most original let’s be honest) and a vibrant, catchy yet supercharged melody that somehow manages to lift the show to a new level. Similarly with their biggest hit ‘Here’s The Thing’ it was as if the band were in front of a completely different crowd. Once again the anthemic chorus and nostalgic waves of rock somehow managed to finally infect the crowd.

Finishing with Stanton, frontman Alex walks through the crowd and decides to crowdsurf at one last attempt in this supposed rock revival. The set as a whole actually flowed pretty well and I'm not for a second saying Sports Team are awful. I'd go as far as to say I'm a big fan, I just think, like many bands, they were slightly out of practice. Once the crowd warmed up they were actually able to put on a half decent performance. Although if I was there in person I'm not sure I’d have waited long enough to be able to see it. 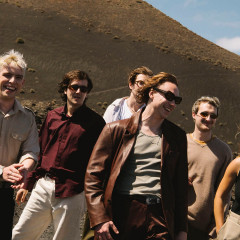