Up-and-coming Dance Pop artist Allegra unveils her latest single ‘He Ain’t You’. A coming of age single for the young emerging talent.

The young British pop-star Allegra has really started making waves in the dance-pop world over the past couple of years. Now though, the classically trained singer/songwriter really embarks upon finding her footing, outlining who she is as an artist.

Her latest single ‘He Ain’t You’ turns away from the upbeat dance tracks fans of Allegra are so used to. Don’t worry though, I am sure this doesn’t mean the end of her outrageously feel-good dance bops. This latest single encapsulates a sense of raw honesty, a hint of maturity and a flicker of vulnerability. ‘He Ain’t You’ exploresthe struggles of moving on from a failed past relationship, finding someone new, but still romanticising those unforgettable past feelings. “But if I close my eyes just for a second | It just might do” “I know it’s not fair | But just for a second | I need to forget that he ain’t you” she sings over the top of an entrancing pop beat. Scheduled for release on the 14th of April, Allegra has paired a glamorous new music video to help illuminate the themes behind her single.

Saying a few words about her songwriting "When I write, my songs always need something personal, and drawn from my own experience,” she says. “I know that if I don’t believe in my music, nobody else will. If it’s not me, I’m not interested: I need to relate, and I need to feel."

Music has been at the centre of Allegra’s heart for as long as she can remember. Memories of family gatherings as a child, are filled with the dance/singing performances she used to put on for everyone. As a classically trained multi-instrumentalist, Allegra started performing concertos from just the age of 13, before recording her very own songs at 14. Allegra has produced some incredible achievements for herself in that time. Most notably, collaborated with massive names within the dance music scene, like her remix of her single ‘Used to Miss You’ with the iconic R3HAB. Ranked in the top 200 of Spotify’s biggest artists, R3HAB turned the track into a global smash hit. In addition to Kiss Fm’s, DJ Majestic’s remix of If You Wanna Love Me, the two remixes have collectively gained a sensational 2 Million Spotify streams alone.

Listen to below for a guided tour into the world of Allegra. 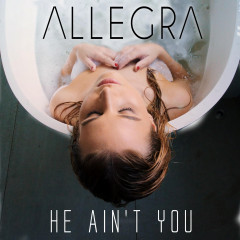 Up-and-coming Dance Pop artist Allegra unveils her latest single ‘He Ain’t You’. A coming of age single for the young emerging talent.