Voice MagReviewsReview: No One is Co…

A one-woman show that packed a punch and delivered the unexpected.

‘No One is Coming’ is a biographical one-woman show performed by Sinead O’Brien – a hopeful Irish runaway determined to make it as an actress.

I didn’t quite know what to expect as I sat in the front row of Riverside Studios in Hammersmith, faced with nothing but a chair, a spotlight, and a smiling Sinead O’Brien, patiently waiting for everyone to take their seats.

The moment the lights dimmed, and everyone stopped talking, something about Sinead’s face said, ‘buckle up, you’re in for quite a ride’, and she was not lying.

Sinead has not had an easy life. Growing up with a mother with mental health/addiction issues, having her father accused of sexually assaulting her and being only a child when she first had to call the doctor to get her mother taken away, it’s fair to say she’s been through a lot.

It’s not easy to turn real-life trauma into entertainment for a theatre full of people, especially with no support on stage, but Sinead did it like a pro. Punctuating a very tearful journey with beautiful Irish folktales that had contrasting themes to life as she knows it was a wonderfully clever way to engage the audience.

Sinead is a natural-born storyteller. With an Irish accent I could listen to for hours, Sinead knows how to command a stage and get an audience to sit up and pay attention.

As far as production value goes, two light changes and a chair was all Sinead had to lean on, and to be honest, it was all she needed. You hang on to every word Sinead says because she says it with gumption and a brutal telling honesty you can’t help but appreciate.

For many, No One is Coming is a relatable story with a simple delivery that left a huge impression.

No One is Coming was produced by Octopus Soup Theatre company, and the Aidan Stark Company, and featured in Riverside Studio London's Bitesize Festival. 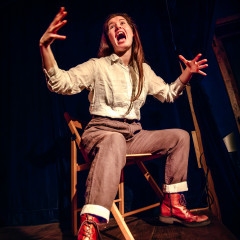 Review: No One is Coming

A one-woman show that packed a punch and delivered the unexpected.