The UK’s early handling of the pandemic and belief in herd immunity “ranks as one of the most important public health failures the United Kingdom has ever experienced”, according to a parliamentary inquiry. The 151-page report, ‘Coronavirus: lessons learned to date’, highlight’s government failings and an intentional “slow and gradualist” approach which the report argues led to unnecessary casualties.

The report states that ministers and scientists were overly lax with allowing infections in order to gain herd immunity, and “made a serious early error in adopting this fatalistic approach and not considering a more emphatic and rigorous approach to stopping the spread of the virus”. Regarding this acceptance of a herd immunity-oriented approach, the report says, “it is now clear that this was the wrong policy, and that it led to a higher initial death toll than would have resulted from a more emphatic early policy”.

The government also failed to take swift action with imposing lockdowns and did not implement sufficiently widespread testing. Boris Johnson only ordered a complete national lockdown two months after the government’s Scientific Advisory Group for Emergencies (SAGE) met to discuss the pandemic. The report notes that “this slow and gradualist approach was not inadvertent, nor did it reflect bureaucratic delay or disagreement between ministers and their advisers. It was a deliberate policy – proposed by official scientific advisers and adopted by the governments of all of the nations of the UK”.

The report is from the Commons science and technology committee and the health and social care committee. It was informed by evidence from more than 50 witnesses including leading figures from NHS Test and Trace and the vaccine taskforce, former health secretary Matt Hancock, and chief scientific and medical advisers to the government.

The report has also highlighted potential examples of British exceptionalism, with the UK failing to include international experts in the scientific advisory process and failing to adopt successful prevention measures from other nations. Public Health England told MPs that it had sufficiently studied and rejected the South Korean approach but was unable to provide evidence of this despite several requests. The report responds: “We must conclude that no formal evaluation took place, which amounts to an extraordinary and negligent omission given Korea’s success in containing the pandemic, which was well publicised at the time”.

The government also took the decision in March 2020 to halt mass testing, which the report says was a “serious mistake” and happened only days after the World Health Organisation (WHO) stated a need for “painstaking contact tracing and rigorous quarantine of close contacts”. The report says, “A country with a world-class expertise in data analysis should not have faced the biggest health crisis in a hundred years with virtually no data to analyse.”

The UK was one of the first countries to develop a test for Covid, and in fact did so as early as March 2020, and yet failed to implement an effective test and trace system. “The slow, uncertain, and often chaotic performance of the test, trace and isolate system severely hampered the UK’s response to the pandemic,” finds the report, adding that the “result was that the Test and Trace operation ultimately failed in its stated objective to prevent future lockdowns despite vast quantities of taxpayers’ money being directed to it.”

The report also highlights what many already suspected to be true, that “existing social, economic and health inequalities were exacerbated by the pandemic [...] including unacceptably high death rates amongst people from Black, Asian and Minority Ethnic communities”. The report also found that BAME staff within the NHS had greater difficulty acquiring appropriate and usable Personal Protective Equipment (PPE). The report calls for “an urgent and long term strategy to tackle health inequalities and to address the working conditions which have put staff from Black, Asian and minority ethnic communities at greater risk”.

It has also been found that there was a disproportionately higher mortality rate for people with learning difficulties and autistic people. The report notes that while this could be due to pre-existing conditions, such conditions “were compounded by inadequate access to the care people with learning disabilities needed at a time of crisis.” Hospital restrictions meant that many disabled people were hospitalised and denied access to carers or family members who they may have relied upon for advocacy.

Professor Trish Greenhalgh, of the University of Oxford, has stated that “it would appear that Sage, Cobra, Public Health England and other bodies repeatedly dismissed the precautionary principle in favour of not taking decisive action until definitive evidence emerged and could be signed off as the truth”, and says that the report may be proof of a “less than healthy relationship” between the government and its scientific advisers. 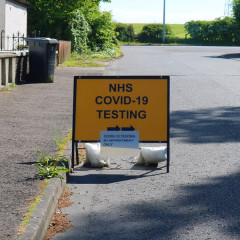