Extreme weather conditions such as flooding are set to worsen in the UK in coming years as the Environment Agency calls for greater climate resilience.

UK floods in the coming years have the potential to kill hundreds of people, the Environment Agency has warned in a new report. The agency has assessed the UK’s readiness to deal with the increasing effects of climate change and concludes that the country has much further to go.

The report warns that climate change will put increasing pressure on the UK’s water environment, increasing the risk of floods, droughts, rising sea levels, and further demand on water supplies. The agency is stressing that climate resilience is just as important as efforts to cut emissions. Climate resilience, according to BSR, is “the ability of a system or community to rebound following a shock such as a natural disaster” and that “building resilience requires not only recognizing potential hazards like extreme weather events, but also understanding the underlying vulnerabilities that may affect recovery from them.”

Environment Agency chair Emma Howard Boyd has said, “it is adapt or die,” adding that, “while mitigation might save the planet, it is adaptation, preparing for climate shocks, that will save millions of lives.” The agency has said it is working with government, communities, and businesses on protection from flooding, and with watchdog Ofwat on water supplies.

The world is set to see a just under 3C increase in the global average temperature by the end of the century. However, the agency predicts that even a rise of 2C would have serious implications, including winter rainfall increasing by 6% and summer rainfall down by 15% by the 2050s. Other impacts include London’s sea level rising by 23cm by the 2050s and an extra 3.4 billion litres of water needed each day before 2050 on top of the 15 billion used currently.

Howard Boyd warns that “we are running out of time to implement effective adaptation measures”, as the agency calls for closer working between the government and businesses on climate resilience and projects to help restore natural systems that absorb carbon and retain rainwater. The agency referenced the flooding in Germany earlier this year as an indicator of where the UK could be headed.

"Some 200 people died in this summer's flooding in Germany. That will happen in this country sooner or later, however high we build our flood defences - unless we also make the places where we live, work and travel resilient to the effects of the more violent weather the climate emergency is bringing", says Howard Boyd.

She concluded, “adaptation action needs to be integral to government, businesses and communities too and people will soon question why it isn’t – especially when it is much cheaper to invest early in climate resilience than to live with the costs of inaction.” 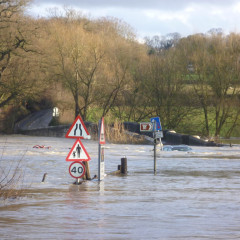 Extreme weather conditions such as flooding are set to worsen in the UK in coming years as the Environment Agency calls for greater climate resilience.