Roland Orzabal and Curt Smith have returned as the classic musical group Tears for Fears, releasing the first single off their upcoming record, The Tipping Point, which will be the duo’s first record in 17 years. The beloved band are the creators of hits such as Head Over Heels, Shout, and Everybody Wants To Rule The World. Their next project has been highly anticipated for almost two decades, and is set to release in 2022.

Ahead of the record’s release on 24 February, the band have released their first single, The Tipping Point, also set to be the name of the LP. Orzabal and Smith have stated that both the album and it’s first single are inspired by the personal and professional “tipping points” that the group endured following 2004’s Everybody Loves a Happy Ending.

Orzabal’s point was when his wife Caroline died in 2017, he told Rolling Stone, “It came at a time when my (late) wife was very ill. I was watching her become a ghost of her former self. So the song’s narrator is in a hospital ward looking at people about to cross the threshold that we call death”.

“The line in the song says, ‘Will you ever know when it’s the Tipping Point?’ meaning, will you ever know when a person has crossed that threshold from life to death when you cannot even perceive that ‘vague and distant void’ as it’s described in the lyric. I have to admit that even in March 2016 when I was read the riot act by doctors about Caroline possibly not making it through the weekend, I was still in denial. I think that when you’ve been close to someone for decades, they are living within you as well as without. And consciously I did not believe she would die, though subconsciously I was, without doubt, preparing for the inevitable, arming myself against the future shock.”

The duo hadn’t disbanded during their time away from recording, and were still touring throughout the time between albums. The last time that they had attempted to go into the studio, they were encouraged by their management to collaborate with “today’s hitmakers”, which ultimately led to disaster, the band stated it was yet another “tipping point”. Orzabal said of the sessions, “we went along with the process and amassed a lot of up-tempo attempts at hit singles. I like a lot of them but when configured into an album, they were tiring to listen to. There was no artistry, no dynamics, no personality to the album”.

However, some of the tracks recorded in the sessions did make the cut on the new record, which includes reimagined versions of unreleased tracks My Demons and Please Be Happy. The track Stay will also be featured on the record, which was initially released as one of two new songs Tears for Fears had recorded for their 2017 best-of compilation album Rule The World. Smith said of the inclusion, “we do have an old school approach to albums in the sense that it needs to tell a story, as well as have a side one and side two. We felt ‘Stay’ had a similar effect as ‘Listen’ on Songs From The Big Chair, it was a long calm breath at the end of the album, the palate cleanser. Also the final lyrics being ‘Stay, don’t stay. Go, don’t go’ made it all the more poignant.” 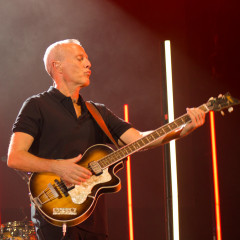 Tears for Fears return with their first album in 17 years