UK-based writer Abdulrazak Gurnah has won this year’s Nobel Prize for literature, which carries an award of over £800,000. He received the honours after 34 years of publishing novels, short stories, and essays that often explore the lives of displaced characters. The 18 judges on the Swedish Academy panel have commended Gurnah for his "uncompromising and compassionate penetration of the effects of colonialism and the fate of the refugee in the gulf between cultures and continents”

The award — which has a notoriously secretive nomination process — came as a complete surprise to Gurnah, who was in his kitchen when he was informed of the momentous achievement.

"I thought it was a prank," Gurnah confirmed in his statement, "These things are usually floated for weeks beforehand [...] so it was not something that was in my mind at all. I was just thinking, I wonder who’ll get it?"

He went on to say: "I am honoured to be awarded this prize and to join the writers who have preceded me on this list. It is overwhelming and I am so proud.”

Born on the island of Zanzibar in 1948, Gurnah emigrated to England at the age of 20 during the aftermath of the brutal Zanzibar Revolution, which saw many Zanzibaris flee the devastation and persecution of their home island. Gurnah has described the "shock it was to discover the loathing in which I was held: by looks, sneers, words and gestures, news reports, comics on TV, teachers, fellow students."

This feeling of being unwelcome, and the marginalisation that came with it, did not prevent Gurnah from earning his PHD from the University of Kent in 1982.

Expert in postcolonial literature Dr Felicity Hand once described Gurnah’s most well known novels as stories that explore “the alienation and loneliness that emigration can produce and the soul-searching questions it gives rise to about fragmented identities and the very meaning of home”.

Gurnah's uncompromising pursuit of evocative, truthful, and compassionate stories that explore the wounds of colonialism and the loneliness of a refugee has made him a well-deserving recipient of this prestigious honour.

Header Image Credit: "Abulrazak Gurnah on Hebron Panel" by PalFest is licensed under CC BY 2.0 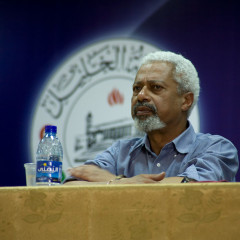