The Association of Independent Meat Suppliers is looking to help its members recruit ex-offenders and those currently incarcerated in the face of a labour crisis brought about by Brexit and Covid. Companies represented by the Association – which covers butchers, processors, and abattoirs – are aiming to hire more inmates via a scheme that allows them to gain paid work on day release.

In a bid to hire more prisoners, the Association will meet with the Ministry of Justice to negotiate further recruitment. The outlook may be positive – a spokesperson for the Ministry of Justice has stated, “Helping prisoners find jobs during their sentence and after release makes it much less likely they will re-offend. We will support all industries with skills shortages where possible, and are working towards bringing levels [of release on temporary licence] back up towards pre-pandemic levels as restrictions allow.”

According to Tony Goodger, inmates who are already involved in the industry through the scheme have been an asset, speaking on behalf of the Association. In reference to the recruitment crisis in the food industry at large, Goodger stated that although the Home Office has advised that “the UK’s domestic labour force should take priority… However hard we and many of the members have tried, staffing remains a challenge”.

In addition to prisoners, many companies are also looking to hire ex-service individuals through charities and the Career Transition Partnership. However, this has not sufficiently covered the labour shortage as Goodger has stated that “numbers are low”. To add to the shortage, the demand for inmates in the workforce has been so large that when contacting HMP Hollesley Bay in Suffolk, Goodger was told, “we’ve reached our quota and we are not allowed to let any more out to go to work”.

If the meeting with the Ministry of Justice has a positive outcome for the Association, this could be an important turning point in rehabilitating inmates and ex-offenders, and changing companies’ attitudes towards them. 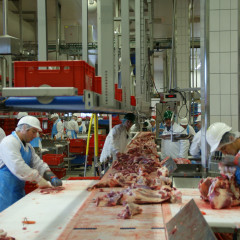