Anderson .Paak is on top of the world, his music increasing in popularity since the musician started out with his debut mixtape, O.B.E. Volume 1, in 2012. The rapper and songwriter has since garnered many hit songs and won Grammy awards, even teaming up alongside pop titan Bruno Mars in his latest project Silk Sonic.

Paak, who is now 35, shared a photo of his new ink on his social media, the tattoo displaying his stance on releasing an artist’s product after their death. It reads: “When I’m gone, please don’t release any posthumous albums or songs with my name attached. Those were just demos and never intended to be heard by the public.” The tattoo picture can be found here.

Posthumous albums have always been a part of music culture, and several late rappers have recently had music released after their death, such as Mac Miller, Lil Peep, Pop Smoke, XXXTentacion and Juice Wrld, to name a few.

Recently, Pop Smoke’s newest album, Shoot for the Stars Aim for the Moon, was released after he was shot dead during a home invasion in February 2020. The album would garner the equivalent of 948,000 sales in the US alone this year, becoming the biggest hip-hop record of 2021. In another example, Juice Wrld’s posthumous 2020 album, Legends Never Die, was released almost a year after his deadly drug overdose in 2019, hitting No.1 on the Billboard 200.

Anderson .Paak is set to release his collaboration album with Bruno Mars soon, as well as  his second collaboration with producer Knxwledge, following their first NxWorries project. His fifth solo album is also in the works, featuring legendary artists such as Dr. Dre and H.E.R. This follows his doubly Grammy-nominated protest song Lockdown, which paid tribute to those marching for racial justice after George Floyd’s death. Paak spoke about the album to Esquire and said, “You’re going to get some real topics, and you’re going to get some substance, but mixed with some great grooves.” 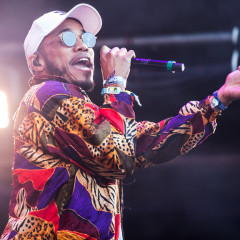 Anderson .Paak's new tattoo warns his music should not be released posthumously