The government’s proposals to tackle crime include the relaxing of stop and search rules and electronic tagging on burglars after their release.

As part of the government’s push to address crime levels, Prime Minister Boris Johnson has advocated for contactable named police officers in national neighbourhoods and “high-vis chain gangs” as a punishment for anti-social behaviour.

Following his release from self-isolation, the PM told reporters that "If you are guilty of anti-social behaviour and you are sentenced to unpaid work, as many people are, I don't see any reason why you shouldn't be out there in one of those fluorescent-jacketed chain gangs visibly paying your debt to society."

PM Johnson also emphasised that the government was putting “£15.8bn into supporting the police”. This follows the Police Federation passing a motion of no confidence in Home Secretary Priti Patel. The chairman of the Federation has since delivered a letter to the PM criticising the Beating Crime Plan.

Labour has accused the government of being “all action and no plan” and shadow home-secretary Nick Thomas-Symonds said community policing has been “decimated” under the Conservatives. 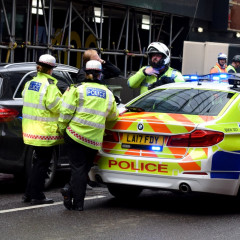 The government’s proposals to tackle crime include the relaxing of stop and search rules and electronic tagging on burglars after their release.