Volcanic activity has thrown the Caribbean island of St Vincent into turmoil, with inhabitants being evacuated and children being put into shelters. La Soufrière, which has been dormant for decades, first started showing volcanic activity in December. That activity picked up last week and has been reported by the UN as a humanitarian crisis that will last months.

Mr Trebucq, the UN coordinator for Barbados and the Eastern Caribbean, said:  "This is a crisis that is going to last certainly more than six months in the sub-region, in Saint Vincent, and other islands."

Although volcanoes are commonly placed within the Caribbean, there isn't sufficient protection placed for civilians especially in the form of shelter, water and food aid.

There is now a desperate plea made by St Vincent for international intervention, as ash has travelled six miles into the air and has engulfed the south, leaving an environmental health hazard for the future when people eventually return back to their homes.

About 4,000 displaced are now living in 87 shelters, and others have taken refuge on neighbouring islands. A total of 16,000 residents were forced to leave their homes and are without power and running water. Those who didn’t manage to get off of the island currently lack basic services such as drinking water.

Mr Trebucq highlighted this and said water provision was the main priority for aid teams, followed by shelter.

"The clean-up of the ashes, finally, is another important priority, in terms of environmental health but also clean-up to make sure that life can come back to normal outside the red zone as soon as possible."

With minimal international coverage, St Vincent is at risk of being another forgotten island that is forced to recover in solitude. Prime Minister Ralph Gonsalves said in a local press conference, NBC Radio that St. Vincent will need hundreds of millions of dollars to recover from the eruption.

If you would like to offer help it has been encouraged to do so by referring to the organisation working with NEMO. 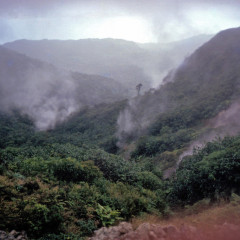