The Mozfest annual science fair took place on Friday night, giving participants and exhibitors a sneak peek at what the weekend has to offer.

Spread across two floors, the fair showcased many of the projects that will then progress throughout the weekend, allowing early visitors an opportunity to see projects close up without having to fight the crowds.

Among the exhibition stalls include demonstrations by BBC News Labs, which is an R&D area. They focus on creating new technologies which will make the process of covering and accessing the news easier for both journalists and consumers. Among the technology on display was software that creates gifs based on news videos, which are then overlaid with subtitles and pushed out to people who have slow internet. They also demoed their translation software, which they claim is industry leading. Firstly, it will take speech and turn it into text, that text is then translated; it is then given a synthetic voice, and finally pushed out through the broadcasting platform.

Another stall showed the potential of Open Badges. The Open Badges programme was started by Mozilla in 2011 with funding from the MacArthur Foundation. It exists to recognise learning in whatever shape it takes, in accordance with a technical specification. They boldly suggested that it can 'change the world', but supported the statement by showing their adoption rate across the world. There are multiple badges available at the weekend festival, but Mozfest Backpack alone hosts 967,966 badges.

The Localization Lab were also there,and they work to translates open source software in an effort to make privacy, security and anonymity online more accessible. Projects they are actively working on include NoScript and The Tor Project.

The fair represented the power of the open movement, mirroring the ethos of the whole Mozilla weekend. It was a collaborative and participatory exchange of ideas about open-source technology that can be collectively worked on to further great causes.

For more coverage of the festival, head on over to our Mozfest Voicebox. 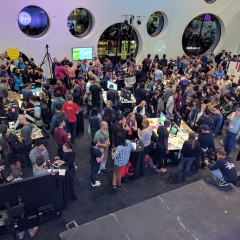