Voice MagNewsRishi Sunak is the n…

Rishi Sunak has won the Conservative leadership race and will become the new prime minister of Great Britain.

His ascension to prime minister follows the resignation of Liz Truss on 20 October. She was the shortest serving prime minister, having only been in the role for 45 days. However, in that time she caused significant economic damage to the markets and her premiership was marked by numerous u-turns.

In her resignation speech, Truss said that the leadership election for her replacement would be run over the course of a week. The rules set by the 1922 Committee meant that only candidates who received the endorsement of more than 100 MPs would be allowed to run. It was briefly believed that Boris Johnson would make a return, but he announced that he would not be putting his anime forward. Penny Mordaunt was also in the running, but announced that she was dropping out. It was later confirmed that she didn’t have the required 100 endorsements.

Rishi Sunak will be the first non-white prime minister, and is also the youngest prime minister the UK has seen since 1812 with Lord Liverpool. He is also possibly the richest person to hold the position. It’s also worth noting that he is the third prime minister in seven weeks, and the fifth is six years.

Sunak was previously the chancellor under Boris Johnson, and was instrumental to the collapse of his government when he resigned on 5 July. He then ran in the resulting leadership election, but lost out to Liz Truss when Conservative party members were balloted.

Throughout that leadership election, Sunak warned that the economic policies that Liz Truss was suggesting would result in economic turmoil, and that proved to be correct. 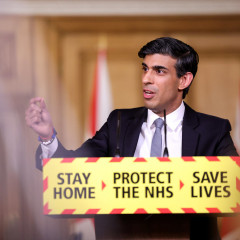 Rishi Sunak is the new prime minister of Great Britain