Voice MagNewsLiz Truss will be th…

Liz Truss has been elected as the new Conservative party leader, and subsequently new prime minister of the United Kingdom, following a summer-long campaign to replace the ousted Boris Johnson.

Facing down the former chancellor, Rishi Sunak, the foreign secretary won 81,326 votes of Tory members to his 60,399, and will be appointed as the next prime minister meeting with the Queen at Balmoral on Tuesday.

Truss is facing an immediate series of challenges, with the cost of living crisis, spiralling energy costs, a war in Ukraine, and an economy on the brink of recession. In her victory speech, she promised to ‘deliver for our country’ by cutting taxes, deal with people’s energy bills, and “deliver on the NHS”. There were no specifics on what delivery will look like – which is something of a continuation of a leadership campaign that was light on details.

She also explicitly stated that there will be a general election in 2024, ruling out the rumours that an early election might be called.

This leadership election marks the third change of prime minister in three years, following Theresa May’s unceremonious dropping by her MPs in 2019. There, Boris Johnson beat out Jeremy Hunt to lead the party into a convincing general election win. He was then forced to step down as prime minister following a spate of resignations in July, putting an end to a premiership marred in controversy.

Statistically, Truss has the lowest margin rate of Conservative party support of any leader chosen by members. Her win over Sunak saw her receive 57.4% of the vote to Sunak’s 42.6%. Every other leader chosen by party members has managed to secure at least 60% of the party vote. 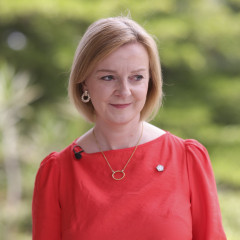