In a statement outside No. 10 Boris Johnson announced he was standing down as Prime Minister.

Boris Johnson has resigned as Prime Minister, after multiple scandals that culminated in an unprecedented 59 government resignations. Truly, a cabinet revolt of this size and scale has never been seen before in British politics.

In a statement made outside No. 10, Boris Johnson announced he will serve “until a new leader is in place.” He later said that it was “painful not to see my term through”, but the main focus of his statement was what he regarded as his biggest achievements. Those achievements included “getting Brexit done’, alongside the vaccine rollout and bringing the UK out of lockdown. He also referred to Ukraine in his speech, but left us none the wiser about the future of our government.

A cheeky ‘them’s the breaks’ injected humour into his resignation, but otherwise the tone and message of his speech left members of the Conservative members angered. He suggested their behaviour as “eccentric”, and that their moves to remove him was just a “herd” mentality.

Although he announced he would stay on as prime minister until a replacement is chosen by the Conservative party, that appears at odds with the will of his now resigned cabinet and MPs more widely, who want him to step aside immediately. Indeed, his position would appear untenable, with much of his cabinet having resigned. Crucially, Keir Starmer has announced Labour will “step up and call a vote of no confidence” if he attempts to carry on until the Autumn. A general election has, however, been ruled out.

As Britain sees its third prime minister step down in less than a decade, our government feels incredibly unstable right now and with the cost of living set to rise, this revolt has only distracted from the real issues we are about to face. 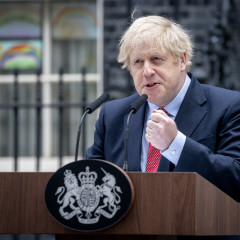 In a statement outside No. 10 Boris Johnson announced he was standing down as Prime Minister.