This sharp sci-fi social commentary impressed our reviewer, and asked important questions around what it means to be human and the value we place on it.

We are pleased to announce that Malcom Galea has been awarded the Brighton Fringe Best Newcomer Award for his “thoroughly thrilling dystopian sci-fi social commentary” show, 0.0031% (Plastic & Chicken Bones).

For its UK premiere, 0.0031% was performed at [email protected] Poets, and brought with it a clever commentary on our growing dependence on technology, and on our approach to issues of climate change and geopolitics.

0.0031% was written by and starred Galea, in a performance that our reviewer said “expertly commands use over a very small amount of space, utilising every last inch.” Elle further said that the production “was cleverly atmospheric and eerie, matching its dark and gritty tones.”

You can read the whole review here, and find out more about Malcolm's work on his website: https://www.malcolmgalea.com 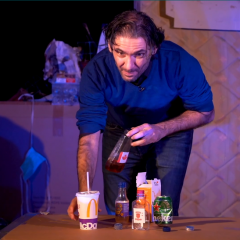 This sharp sci-fi social commentary impressed our reviewer, and asked important questions around what it means to be human and the value we place on it.