It has been predicted that poorer homeowners may have to sell their homes in order to fund their own care under the new proposals.

Changes to the social care cap across England have been passed in government despite disagreements from Labour and several Tory ministers. The cap is predicted to hit poorest homeowners hardest, causing controversy and once more provoking criticism of the Conservatives’ attitude towards their less wealthy constituents.

The amendments to the social care cap will change the limit on how much people in England would pay for care costs. The change has been criticised as unfairly impacting poorer households more than wealthier ones. Reportedly, the way the cap is calculated means that poorer people will be paying a significantly disproportionate amount.

The cap is intended to limit the amount people will pay to fund care during their lifetime at £86,000, with local authorities paying for care over that amount. The cap is set to be implemented in 2023. The £86,000 will come from national insurance payments, which were controversially announced to be increasing as of April next year.

The £86,000 limit will be universal, therefore ensuring that poorer households will be paying out a larger portion of their income and assets than those wealthier than them. It has been predicted that poorer homeowners may have to sell their homes in order to reach the amount of £86,000 in order to access care. The amendment also means that the £86,000 will not include means-tested payments that lower income people receive from local authorities to contribute towards their social care.

The move will reportedly save the government £900 million a year by 2070, but at the cost of the poorest in the country’s health and safety along with the immense financial burden. Many people receiving care are already less well off, having to rely on benefits if they are unable to work, which will have become more of a stress after the cut to the £20 Universal Credit increase.

The amendment was passed by 272 votes to 246 but was controversial in parliament, with nineteen Conservative MPs voting against the plan and a further 28 abstaining to vote. Among the Tory MPs who voted against it was Mark Harper, the former Conservative chief whip, who had asked that the amendment be withdrawn. “It potentially disadvantages the less well-off and those of working age with lifelong conditions,” he said. “DHSC [Department of Health and Social Care] ministers haven’t properly worked with the sector or MPs to explain their thinking or decisions.”

Labour’s deputy leader Angela Rayner pointed out that this move would break Tory manifesto promises, saying that they had “voted to break their promise that nobody would have to sell their homes to pay for their social care costs and voted to hammer poorer pensioners to protect millionaires in mansions”.

She also highlighted that the amendment would disproportionately affect the north of England compared to the south, saying “It’s an inheritance tax on the north and a con, not a social care plan.” Economist Andrew Dilnot also commented on this north/south divide, saying, “It will tend to hit people in regions of the country with lower house prices harder than it does those in regions with higher house prices […] There is a north-south axis to this, that people living in northern and other less high house price areas are likely to be hit harder by this on average.”

Header Image Credit: "Protest outside County Hall Norwich against Norfolk County Council cuts to social care A2" by Roger Blackwell is licensed under CC BY 2.0 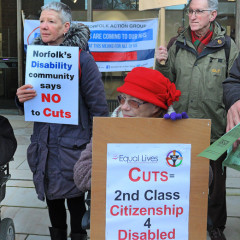 It has been predicted that poorer homeowners may have to sell their homes in order to fund their own care under the new proposals.