The Home Office is covering up its own research into the reasons why refugees and asylum seekers need to enter the UK. Charities have said this is because ministers “know their arguments don’t stand up” if they were to release their findings.

Ministers have been claiming that refugees are drawn to the UK mostly by “pull factors”, but are refusing to release their own research which could prove or disprove this. On Thursday, the deputy prime minister Dominic Raab attempted to defend the government’s controversial plan to process asylum seekers through offshore centres in Albania, by saying it was “reducing the pull factor”. Home Office minister Chris Philp has claimed that accepting refugees who have travelled via Europe “creates a pull factor where migrants are incentivised to undertake dangerous and illegal journeys”.

Advocacy officer at Médecins Sans Frontières (MSF) UK, Sophie McCann, stated: “Ministers are covering up evidence that is central to their case for the need to target refugees and asylum seekers with inhumane ‘deterrence’ measures.

“Ministers are refusing to release the evidence they hold on whether or not such a pull factor even exists.

“The reality is that ‘pull factors’ are a myth – people who are fleeing persecution or conflict don’t need any further incentive to look for safety. It is hard to see why the government would refuse to share evidence that supports its plans – the only conclusion to draw is that they know their arguments don’t stand up.”

Previous research from the Home Office says that “they [asylum seekers] are guided more by agents, the presence or absence of family and friends, language, and perceived cultural affinities than by scrutiny of asylum policies or rational evaluation of the welfare benefits on offer” – suggesting that their current claims about “pull factors” are unfounded.

A Refugee Council report from last week also highlighted that Priti Patel had made claims that contradicted Home Office information, saying that 70% of small boat arrivals “are not genuine asylum seekers”, when analysis that had in part drawn from Home Office data shows that nearly two thirds of those crossing the channel in small boats are in fact judged as genuine asylum seekers and allowed to remain.

According to experts, small boat arrivals in the UK have increased in recent years due to the fact that the UK government has closed off other entry methods such as ferries due to increased security measures. Patel seems intent on reducing small boat arrivals without accepting that refugees will continue to need to reach the UK and seems unwilling to consider how to help them or even confront the issue.

Patel’s nationality and borders bill has also faced considerable criticism, with more than a hundred leaders of human rights and anti-slavery groups set to write a letter to MPs this week calling on them to challenge the bill. The letter argues that the bill will be “catastrophic” and have “unintended negative consequences” on victims of trafficking and slavery due to the fact that it is aiming to tackle asylum seeking and modern slavery at the same time. The letter highlights the danger of conflating the two issues.

Tamara Barnett from the Human Trafficking Foundation, who coordinated the letter, has said: “This bill will lead to fewer prosecutions of actual criminals, while those who genuinely need support, including children, will be failed by the new system. MPs need to urgently amend this bill before it’s too late.” 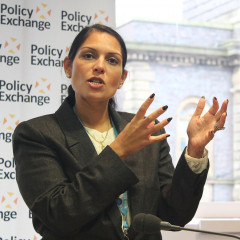