One of the last events at COP26 was ‘Climate Outreach: 26 COPs and no humanity? Don't let COP fail on human rights’, a press conference highlighting the climate summit’s failings in addressing human rights.

Host Amiera Sawas of Climate Outreach opened by saying that in the “final moments of this historic conference, we […] are calling on negotiators to do better”. She also noted that “we have seen a weakening of […] human rights language across the text so far”. She began by sharing a quote from a young climate activist and delegate from Brazil who had questioned COP26’s attitude to human rights, saying:

“Taking away the human rights language from final documents is a disrespect to the work we have made and it’s counterproductive to find[ing] real solutions to climate change – this is not the way to solve our problems – we need you to actually hear youth, even if they’re not from marginalised countries, we are ultimately younger versions of yourselves.”

Deep Basu Ray of Climate Outreach spoke next and said that there are “gaping holes” in the ACE (Action for Climate Empowerment) agreement that was decided upon on Thursday night. He noted that the starting text had included specific references to a rights-based approach as a “key principle for delivering ACE,” but “the final version got rid of this”. He stated that there had been a “disturbing trend across all of the COP26 negotiations, and that is to strip out all meaningful references to human rights”. He also called for more inclusivity in negotiations, saying that people needed to be involved, and that “governments must safeguard the rights of citizens”.

Obed Koringo of Care International Kenya expressed his discontent with proceedings also, saying: “It makes me angry to see the push and pull of the discussions of this COP”. He also brought up the inequalities in the agreement in regard to poorer nations who require funding for climate adaptation, noting that “adaptation finance still remains a big unresolved issue, with wealthy countries far behind on payments and no sign on whether and when this will appear.”

Teresa Anderson of Action Aid International also spoke of this inequality. “The UN climate system currently doesn’t provide any support to the people in the Global South […] who are hit by catastrophic climate impact”, she said, adding that “we were really frustrated to see that the new draft still doesn’t do anything to deliver funds to help countries recover and rebuild.” She stated that essentially, “the text is full of fluffy language” rather than real concrete commitments.

Sébastien Duyck from the Centre for International Environmental Law criticised the detached nature of world leaders at the summit, saying that “negotiations here seem to take place in a vacuum”. He also addressed the inequality mentioned by fellow speakers, saying: “communities most exposed to the harms resulting from climate impact are actually seeing those harms accelerated”. He expressed that he would rather there was “no deal than a bad deal”, and that he was angry that the Paris Agreement had been “weaponised” by wealthy countries to place their interests over the rights of poorer nations.

Deep Basu Ray also highlighted the UK’s particular shortcomings in negotiations, particularly with ACE, saying that the UK in fact did not negotiate but instead took a “facilitation role” by “being silent to facilitate the process”, allowing the deal to be finalised at the expense of human rights.

During the time allotted for questions, a young man in the crowd asked the panel: “Why do the people in that negotiation room not feel the urgency that we here do? […] How can we make this anymore clear than we’ve been trying to for decades? […] Is there anything else that we can try?”

Teresa Anderson answered that “the issue of loss and damage has had more attention this year than any year before”, suggesting that this showed hope for future progressions, adding that “governments now know that their citizens are expecting something”. Obed Koringo remained hopeful also, saying that “we are not in despair yet”. He highlighted the media as essential, saying: “we depend on you to put this message across”.

Deep Basu Ray highlighted the need to create space for marginalised voices at these events, noting that Pacific Islands mostly were unable to send delegates and that their voices were therefore not heard. He stated that we must then support the capacity of the smaller delegations.

Sébastien Duyck spoke directly, saying that “we must demand here and in the future that governments invest all of their energy into delivering results that protect rights instead of promoting false solutions.” He concluded: “A bad agreement on Article 6 will deal a death blow to the ambition that is contained in the Paris Agreement and we should not tolerate this”. 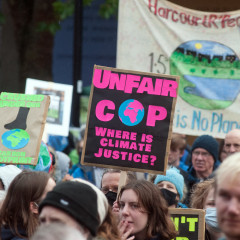 Has COP26 failed on human rights?