More than 2,500 police officers and staff are working without having been through the proper checks and vetting process, a new investigation from the BBC has found. It has been revealed that over a quarter of UK police forces have not ensured that their staff meet the national guidelines brought in as of 2006.

Vetting is a series of background checks that staff must go through to ensure that they are not unsafe or a liability. These checks include past convictions, factors that could foster corruption – such as financial problems, and behavioural analysis – sometimes including that of families and friends. The National Police Chiefs Council have said that it is the responsibility of each force to ensure the proper vetting process is being adhered to.

In 2006 the College of Policing introduced national guidelines to ensure that forces across the UK were using the same vetting process. In 2019 police watchdog Her Majesty's Inspectorate for Constabulary, Fire and Rescue Services (HMICFRS) set July 2020 as a deadline for all forces to retroactively ensure that all officers and staff have been checked to these guidelines.

However, through a series of Freedom of Information requests, the BBC’s File on 4 programme obtained figures that show that over a quarter of police forces have still not met this deadline. The figures are from 41 forces out of a total 47 and revealed 2,515 officers and staff have not been properly checked.

The Metropolitan Police are not represented in these figures as they claimed they were not able to provide the data in time. However, in May of this year File on 4 had sent a similar FoI request to the Metropolitan Police which revealed that 650 officers and staff had still not been vetted to the 2006 guidelines.

The Met are under particular scrutiny after one of their officers, Wayne Couzens, was convicted of murdering Sarah Everard. Many questioned why further attention had not been given to several red flags that had been raised in relation to Couzens, including allegations of indecent exposure from 6 years before Everard’s murder.

Former Inspector of Constabulary, Zoe Billingham branded the findings as “deeply disappointing”, saying: "We know that policing attracts predators, a very tiny number, so of all of the professions and all public services, policing really does have to have the state of the art tightest vetting processes and procedures in place […] It [retrospective vetting] needs to be completely nailed down now so that all officers, all staff, and volunteers working in policing have the right checks and safeguards in place." 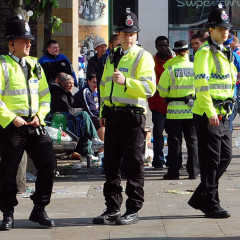 Thousands of police recruits were not subject to proper background checks