A £1.5 million loan taken out by Prince Andrew was paid off by companies linked to Tory donor and financier David Rowland, according to Bloomberg News. Rowland has donated over £6 million to the Conservatives in recent years.

On Tuesday Bloomberg News said they had seen documents showing that a £1.5 million loan taken out by Prince Andrew in December 2017 from Luxembourg-based private bank Banque Havilland, was then paid off 11 days later by companies linked to Rowland, who founded Havilland. The money was also sent to Andrew’s account via an Albany Reserves Ltd. account, a company of which Rowland is a director.

Banque Havilland staff had warned that the loan was “not in line with the risk appetite of the bank,” but a note on the document claims that it was granted in order to open up “further business potential with the Royal Family”. The loan had also been extended several times, most recently by 250,000 which was labelled as being for “general working capital and living expenses.”

Rowland has donated over £6 million to the Conservative Party in recent years and was even announced as treasurer of the party in 2010 before he withdrew from the role after it was suggested that he had been a tax exile in Guernsey, the registry location of Albany Reserves Ltd. The Conservative Party reportedly declined to comment on the allegations regarding Rowland and Andrew.

Andrew receives £250,000 annually from his mother, the Queen – no mean sum – but lives an especially lavish lifestyle which has led many to question how it is funded. Andrew is also accused of the sexual abuse of Virginia Giuffre when she was underage, for which she is suing him. The Queen is reportedly also funding Andrew’s legal fees.

Andrew is known to have had a friendship with Jeffrey Epstein, the convicted sex offender and financier who was connected to several key figures within the political and entertainment worlds. Ghislaine Maxwell, former girlfriend of Epstein and alleged facilitator of his sexual offences, is also a close friend of Andrew. Maxwell is currently on trial in New York for sex crimes, conspiracy, and perjury in relation the Epstein case.

Former UK government minister and author of a book concerning the royal family’s finances, Norman Baker, has noted: “This demonstrates yet again that significant questions need to be asked about Prince Andrew’s business dealings and his association with some dubious characters”, saying that “parliament should investigate this matter with some urgency.” 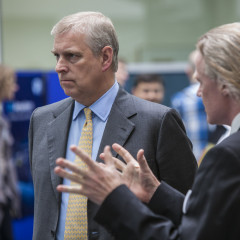