The climate conference COP26 finally came to an end on Saturday night, a day later than it was supposed to, after over two weeks of negotiations. Said negotiations ended with almost 200 countries signing the ‘Glasgow Climate Pact’. Here are some of the wins and losses for climate action in the negotiations.

Commitments to coal reduction fell short during COP26, with the initial ambition of a “phase out” of coal changed to a “phase down” after objections from China and India. Bizarrely, this is only the first COP agreement to make a direct reference to phasing out fossil fuels since the Kyoto protocol was signed in 1997. This is due to the sway held by the countries who heavily rely on or benefit from producing or consuming fossil fuels. Although a COP agreement finally containing direct reference to the reduction of fossil fuels is a comparative win, it is still not enough of a commitment. Coal is the dirtiest of all the fossil fuels and the International Energy Agency has warned that to stay within 1.5C of global warming, the steps taken would have to be drastic. To remain below 1.5C, at least 40% of the current 8,500 coal-fired power plants in the world would have to be closed by 2030.

On a more positive note, over 100 leaders have committed to halting and reversing deforestation and land degradation. The countries who have committed to this action represent over 85% of the earth’s forests. The commitments are supposed to be reached by 2030 and £8.75 billion of public funding and £5.3 billion of private investment have been promised to aid this. This public funding will come from 12 countries including the UK between 2021 and 2025 and will support the reforestation work of developing countries, including protecting Indigenous rights, tackling wildfires, and restoring degraded land.

National plans for cutting emissions by 2030, known as NDCs or nationally determined contributions, are currently vastly inadequate if global warming is to be kept below 1.5C. In fact, research published during COP26 estimated that current NDCs would lead to 2.4C global warming, far above the 2C limit set in 2015’s Paris Agreement. India was the only country with major emissions who came with a new NDC, and in accordance with the Paris Agreement, countries are only required to set a new NDC every five years, which would see the earth going far beyond 1.5C by 2025 – the date when countries would next be required to set a new one. However, an agreement was made to make revising NDCs a discussion point for next year’s COP in Egypt, and the one following in 2023. Hopefully, some changes will be made at these summits.

In 2009, wealthier countries had promised $100 billion a year in funding from 2020 for poorer countries in order to help with climate adaptation and recovery. However, only $80 billion had been allocated as of 2019, the last year for which data is available. Talks at COP26 promised the rightfully angered poorer nations that over the next five years they would see a change, and that funds will reach $500 billion. Poorer countries also asked that more funding go to climate adaptation rather than emission cuts. Most climate financing currently goes to the projects that provide the most profit – emissions cutting projects like renewable energy schemes in middle income countries who don’t necessarily need the funding. Meanwhile poorer countries remain severely underfunded but still left to deal with the devastating impacts of climate change. The text now includes an agreement to double the amount of funding that goes to climate adaptation; however, this still falls short of the 50:50 split between emission cuts funding and adaptation funding proposed by the UN.

Certain countries attempted to use the 2015 Paris Agreement as leverage to excuse themselves from committing to more definite action. The Paris Agreement set 2C global warming as the limit and said that temperature rises should be kept “well below” that, with 1.5C as a target. COP26 sought to set 1.5C as the new limit, which some countries claimed was “reopening the Paris agreement”. However, thanks to advancements in science and climate understanding, the case for the 1.5C target was argued and won – one of the more positive outcomes from COP26. 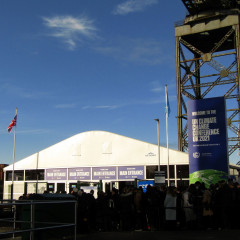 The main outcomes of COP26