Adele reportedly had to finish the recording of her upcoming album, ‘30’ six months early, so that there was enough time to process the vinyl formats of the album before its release and in time for the Christmas period. There is a problem within vinyl production that is causing many artists to have to do the same these days.

Sony Music have said that over 500,000 copies of the LP have been manufactured, with the company pushing other catalogued artists out of production to ensure that there are enough physical vinyl copies of the record to coincide with the album’s 19 November release date. Manufacturing shortages and overbooked vinyl pressing plants have made it much harder for artists to release music on vinyl, essentially rendering LP pressings as limited editions.

Vinyl record sales have been on the rise since 2006, taking over from CD sales last year for the first time since 1986. Big retail chains such as Walmart, Target and HMV often ask for their own colour variant versions of records, on top of exclusives that the artists themselves may tout. The demand for the same record to be pressed onto different colours has caused a backlog that mirrors so many industries during these pandemic times.

David Macias, head of the indie label Thirty Tigers said: A lot of people were looking for ways to keep themselves entertained at home during the pandemic, as a configuration, it’s gone from the cool factor to a huge chunk of the business. In 2019, Thirty Tigers did about 295,000 units of vinyl, and this year we’re on pace to do 800,000. It’s crazy how much it’s blown up in two years.”

Physical records make up around 10% of all revenue earned by the recorded music industry, and two thirds of that is down to the sale of vinyl records, according to the Recording Industry Association of America. Vinyl brought in $467 million, and has a year-on-year growth of 85.7%, partly down to increased interest during the pandemic.

Unlike Adele’s six month time-frame, most artists have to finish recording up to nine months prior to an album’s release. Hip hop artists tend to not worry as much about their physical sales, and often opt for a more digital approach, while pop stars usually release records after their initial release, such was the case for Olivia Rodrigo’s ‘Sour’. Taylor Swift’s re-recorded ‘Red (Taylor’s version)’ album is also set to release 19 November alongside a vinyl version too, and has similarly booked up pressing plants. Macias said: “If you miss your album street date by three or four months, it can reduce your vinyl sales to 30-40% of what they otherwise would have been.”

Ed Sheeran’s new album, ‘=’ was finished in July, but somehow managed to fast-track processing, allowing for vinyl to reach stores for his release date late October. He said in an Australian radio interview: “There’s like three vinyl factories in the world, [there are actually dozens around the world, but that is beside his point] so you have to do it like really upfront — and Adele had basically booked out all the vinyl factories, so we had to get a slot and get our album in there. It was like me, Coldplay, Adele, Taylor, ABBA, Elton [John], all of us were trying to get our vinyls printed at the same time.”

Carrie Colliton, a co-founder of Record Store Day, said: “It used to be that only stuff like limited-edition RSD titles was allocated, but now there are allocations on every title almost every week — every new release and every catalog restock.” ATO Records head of sales, Mike Quinn mentioned: “It’s been like Tetris, trying to prioritize what we’re using each month of capacity for.”

Smaller bands and musicians are being told that their records cannot be pressed until August 2022 at the earliest thanks to the delays, that’s if they start processing records right now. Colliton said, “Target needs X thousand copies of a gold-colored ‘Rumours’ right now so they have an unending supply, when some band that couldn’t go on tour and hasn’t made money for a year is trying to get a thousand copies of their record pressed on any color — that doesn’t seem fair. But you can’t fault [the chains] for doing it.” She added that if large chains are ordering vast amounts of records, and are able to solicit and store them, agreeing to the quantity is “a good business thing for everybody involved.” Fleetwood Mac’s records are rumoured to be a large reason for why vinyl delays are increasing, apparently, there is a plant in the south of the US that only ever presses their album ‘Tusk’.

Coloured vinyl pellets are in such short supply that plants have had to tell labels that they need to pick different variants, otherwise their records cannot come out at their expected times. Sean Rutkowski, vice president of an independent record plant in New Jersey said: “The more color variations there are, the more chance there is for delays. We’ve had records with seven-plus color variations announced out of the gate. And in the environment we’re in now, it makes it really hard to hit those deadlines across the board for all those records at the same time, unless the labels are really working super far ahead.”

The increase in vinyl’s popularity as of late is a good thing, but there needs to be more plants and materials so that more independent artists can release vinyl too, there simply isn't enough colour or space to go around. Rutkowsi said: “The reality is that these frustrations are frustrations because people are embracing the format. So I’d much rather be in a situation of having to change 43 records because we couldn’t get the right color compound than have to scramble to keep the presses running. We’ve done about 1400 different orders over the course of the year, and we’re a mid-sized (plant) here in the U.S.”

It has become increasingly hard for newer musicians to make money within the industry thanks to music streaming, and the lack of ability to release vinyl on time will no doubt be detrimental to fledgling artists wishing to make a name for themselves. At least the problem is becoming more known, so hopefully it can be rectified by those who can fund and support more plants and materials. For the time being, however, it seems as though both labels and pressing plants alike are content re-releasing or bulk manufacturing the records they know will sell the highest numbers.

Header Image Credit: "record player" by assillo is licensed under CC BY 2.0 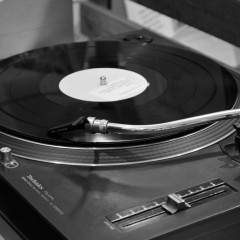