An alleged 500+ police officers contained Indigenous land defenders for hours at the climate protest in Glasgow, highlighting inequalities during COP26.

Kettling is a police strategy which Scottish Community & Activist Legal Protection (SCALP) describe as when “police surround demonstrators to keep them in a particular place. This is called a ‘kettle’, or in official police language, ‘containment’. Kettles can be very large, holding hundreds, sometimes thousands of people, or can be very small, containing only a dozen. The key feature of a kettle is that people are held within it until the police decide to let them go. Sometimes, police have decided against releasing kettled crowds and instead carry out a mass arrest.”

The kettling that occurred on Saturday was captured and shared via anInstagram post from Indigenous environmental activist Ta’Kaiya Blaney. In the post Blaney states: “This is what happens when you don’t sit at the table. 500+ cops kettled a small march calling out COP26 on inaction, trapping Indigenous land defenders inside. On the outside, a delegation of Black and Indigenous land defenders from the west coast of so-called canada as well as local students were pushed around by police.

“Police established a second line to separate those inside from witnesses, legal observers, and the surrounding crowd - a tactic we recognize as an exclusion zone to reduce accountability to the public. Everyone kettled was denied food, water, and access to bathrooms for hours; including those who weren’t even participating in the action. The creation of exclusion zones at an international forum is terrifying.”

The footage shared by Blaney shows police officers pushing back the crowd from another line of police officers keeping another crowd contained, reportedly the Indigenous land defenders who were kettled. In one of the videos, an attendee also alleges that there had been “brutality” enacted on those kettled.

The policing budget for COP26 isreportedly around £250million, with officers being drafted from around the UK to work with Police Scotland, one of the largest forces in the UK, second only to the Met.

Blaney commented on this intense police presence, expressing that this is what Indigenous land defenders are consistently subjected to. “Inside the COP dignitaries and world leaders desperately work to salvage global economies built on fossil fuels and colonialism. In order for Indigenous peoples to access negotiation space they are subjected to intense surveillance and policing in order to control messaging and methods of resistance,” Blaneywrote.

“This is an extension of policing that our movements experience back home at an international gathering of state governments responsible for the destruction of our lands and climate. It is not in any way surprising. This is exactly what we expected and have been facing for decades of climate negotiations.

“There is no illusion of progress, emissions are intensifying, the police state is growing stronger, and Indigenous leaders addressing this destruction internationally are still being murdered. This is just the beginning of COP.” 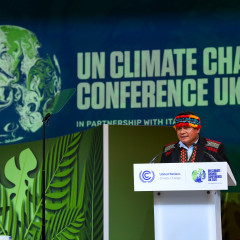 An alleged 500+ police officers contained Indigenous land defenders for hours at the climate protest in Glasgow, highlighting inequalities during COP26.