Alok Sharma met with Indigenous leaders at COP26 to discuss the importance of Indigenous knowledge in climate solutions.

COP26’s President Alok Sharma met with Indigenous leaders at the climate summit yesterday to open up a dialogue about what can be learnt from Indigenous peoples’ climate work, and what must be done to ensure that their climate work is sustained and protected.

Sharma opened the event by expressing that he was hoping for “a good exchange of views” and that to “ensure effective climate action”, listening to Indigenous peoples will be “vital”. He highlighted the importance and effectiveness of Indigenous peoples’ climate work, saying that they “have climate solutions to offer and we have to take that seriously”.

UNFCCC executive secretary Patricia Espinosa also spoke, noting that “governments alone cannot solve the climate crisis”. She said that climate action needs to have a “clear pathway forward” and that Indigenous knowledge will be “essential” to this. She also touched on something that was brought up often during the event – the resilience of Indigenous peoples, saying, “one thing Indigenous people don’t do is give up”.

Rodion Sulyandziga, Director of the Centre for the Support of Indigenous Peoples of the North, spoke next and called on governments to “put human Indigenous rights as the centre of climate justice”. He noted that it is everyone else who has always been behind on climate protection, saying that Indigenous people “have always treated nature as their strongest ally”.

Fawn Sharp of the National Congress of American Indians called for an independent fund for Indigenous peoples to be set up, separate to the Green Climate Fund. She also asked that there be more “inclusion of strong and meaningful language” in Article 6 to specifically protect Indigenous peoples’ human rights. She also expressed that for any meaningful change to happen, governments will need to “provide for full participation of Indigenous people”.

HIndou Ibrahim representing the Indigenous Peoples of Africa Coordinating Committee told the event that as an Indigenous person she was “not here as a victim”, but instead, “here as a solution”. She also noted that “finance needs to be on the ground”, but like many other attendees that day highlighted that the financing that has been promised to Indigenous people previously often has very little impact.

A representative of the Coordinator of the Indigenous Organizations of the Amazon Basin also brought up the issue of funding, and lack thereof, asking “how do we know it’s going to reach us?” He also pointed out that non-Indigenous people had wasted resources into solutions that didn’t work, saying that as Indigenous people, “we already have our solutions […] give power to the solutions we have”.

Dalee Sambo Dorough, International Chair of the Inuit Circumpolar Council, drew special focus to the Indigenous peoples of the Arctic and the pertinence of climate change to them. She told the event of how Inuit communities had “nurtured a reciprocal symbiotic relationship” with the Arctic over thousands of years and questioned how “energy solutions framed as ‘green’” did anything to help them when they seem so “far away from our homeland”. She also pointed to Indigenous people’s resilience and intuitive ability to adapt but noted that climate change is taking place at such a fast pace that it is near impossible for them to continue to adapt. She called for “unprecedented and massive” steps from world leaders to tackle climate change at this summit.

An Indigenous rights activist from the Pacific Islands questioned the two minutes speech time that Sharma had allowed each leader with, asking how he was supposed to cover everything he needed to in such a short space. He also addressed what we mean when we say that we must learn from Indigenous peoples, saying, “our mentality is what is required […] the mentality that everything is interconnected”.

Victoria Tauli Corpuz spoke next and said that Indigenous people were “suffering from impacts of solutions, as well as problems”, highlighting again that we must question how ‘green’ our solutions are. She also brought up the £1.7 billion in funding that has been announced for Indigenous people, asking “what mechanism will be put in place for Indigenous people to get direct access to this?” She pointed to the imprisonments and assassinations of multiple Indigenous activists, saying, “if you really believe Indigenous people can contribute, stop killing them and putting them in jails”.

Attendees were then given a chance to pose questions or statements to Sharma and the Indigenous leaders. A spokesperson from the Indigenous Environmental Network spoke and criticised the air of “self-congratulation” amongst world leaders at COP26, when they and their countries were solely responsible for emissions. Sharma responded that the aim of COP26 is to reduce emissions but gave little more in his answer.

A Youth for Climate delegate from Romania asked how people could advocate for Indigenous peoples in countries within Europe such as her own, where there are theoretically no Indigenous groups. The activist from the Pacific Islands responded to her that they are “very capable of advocating on our own behalf […] open up spaces and let us do the talking”.

There are more events at COP26 and around Glasgow highlighting the voices of Indigenous peoples while the climate summit takes place. Let’s hope that our governments decide to listen. 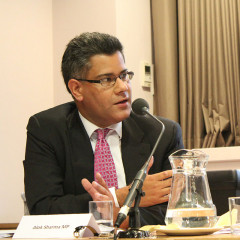 Alok Sharma met with Indigenous leaders at COP26 to discuss the importance of Indigenous knowledge in climate solutions.