The newly crowned richest man on earth tweeted that he would donate the money if the UN can transparently describe how it will save lives.

This past week, Elon Musk has surpassed Amazon’s Jeff Bezos as the richest man on Earth. According to Bloomberg’s Billionaire Index, he has a net-worth of over $335 billion as of Tuesday this week. In a recent interview with CNN, World Food Programme’s David Beasley challenged both of the ultra-wealthy business tycoons to donate to help solve world hunger, saying, “$6 billion to help 42 million people that are literally going to die if we don’t reach them. It’s not complicated.”.

Musk sent out a public tweet in response, stating: “If WFP can describe on this Twitter thread exactly how $6 billion will solve world hunger, I will sell Tesla stock right now and do it.” He added, “But it must be open source accounting, so the public sees precisely how the money is spent.” $6 billion would amount to only 2% of Musk’s overall net worth.

Beasley then replied to Musk’s thread, mentioning that the WFP did indeed have systems in place for transparency as well as open source accounting. The interview with CNN was prompted after Beasley wrote on Twitter calling out the billionaires, following the news of Musk’s large income increase.

According to Beasley, if the world’s top 400 billionaires all chipped in to help, it would only take up 0.36% of their total net worth each to prevent worldwide famine, an issue that is affecting 43 nations globally. He said to CNN: “This is just heartbreaking, I am not asking them to do this every day, every week, every year. We have a one time crisis, a perfect storm, on conflate climate change and Covid. It’s a one time phenomenon.”

On Monday, Beasley called on Musk once again, saying: “Instead of tweets, allow me to show you. We can meet anywhere – Earth or space – but I suggest in the field where you can see (World Food Programme)’s people, processes and yes, technology, at work. I will bring the plan, and open books.”

Since the interaction, Musk is yet to donate anything to WFP, but Beasley is staying positive, saying: "For him to even enter into this conversation is a game-changer because simply put, we can answer his questions, we can put forth a plan that's clear, any and everything he asks, we would be glad to answer. I look forward to having this discussion with him because lives are at stake."

Jeff Bezos recently addressed COP26, stating that he would donate $2 billion to the world hunger cause, coming from the Bezos Earth Fund, which pledges to donate $10 billion in total over this decade. He said: “Nature is beautiful but it is also fragile. I was reminded of this in July when I went into space with Blue Origin. I was told that seeing the earth from space changes the lens through which you view the world, but I was not prepared for just how much that would be true.” In September, Bezos also donated $1 billion in grants to focus on conservation efforts.

Both billionaires have the capacity to do more with the vast wealth that they have accrued, the amount pledged by Bezos is simply not enough when compared to the amount that Amazon earns as a company each year, and Musk seems to be using his notoriety to question the ethics of WFP without actually helping the situation himself at all, even though he is more than capable of doing just that. It doesn’t help that Musk openly tweeted against the proposal of American billionaires being taxed more, he is looking incredibly greedy at the moment.

If these businessmen truly want to be seen as the ‘real-life Tony Starks’ that their supporters deem them as, then they should really be placing more emphasis on the crises affecting the world, especially considering that projects such as Blue Origin and SpaceX could be increasingly damaging to the environment as they gain more traction.

Header Image Credit: "Elon Musk" by dmoberhaus is licensed under CC BY 2.0 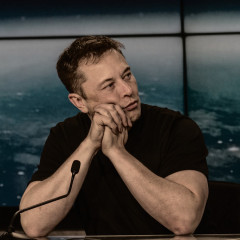 Elon Musk is willing to sell $6 billion of Tesla stocks, to donate to help world hunger

The newly crowned richest man on earth tweeted that he would donate the money if the UN can transparently describe how it will save lives.