World leaders – absent and present – are facing criticism for their level of commitment at the climate summit in Glasgow.

The climate summit COP26 kicked off in Glasgow on 31 October and will be a chance for the world’s leaders to discuss and commit to climate action. But in light of several leaders’ absences and cases of controversy from even those attending, many are left with questions as to the level of commitment to substantial change.

It has been confirmed by the Kremlin that Russian President Vladimir Putin will not be attending COP26, and gave no reason as to why. A Kremlin spokesperson assured that climate change was an “important” priority for Russia, however, there have been concerns regarding Russia’s handling of climate issues. Russia is responsible for an estimated 5% of total global emissions, and Climate Action Tracker has labelled Russia’s commitment to climate action as “critically insufficient”. Last week at the G20 summit, US President Joe Biden accused that both Russia and China “didn’t show up in terms of any commitments to deal with climate change”.

China’s President Xi Jinping will also not be joining COP26 in person this year but will be present and communicating at the event via video link. Jinping has avoided international travel since early 2020 when the pandemic began. Although there have also been concerns for China’s commitment, Jinping’s involvement will be taken by many as a hopeful sign. However, China, perhaps more than any other nation, is facing increasing pressure to boost climate efforts. A report from early this year found that China was responsible for 27% of global emissions, more than the entire “developed” world combined. The UN has said that China must commit to “ambitious” action if the country wishes to make a genuine commitment to climate action.

Brazilian President Jair Bolsonaro will also be absent from COP26, as he is reportedly instead visiting an Italian town which is awarding him honorary citizenship. Brazil, and Bolsonaro specifically, are under particular scrutiny regarding climate issues due to the continued destruction of the rainforest in the country, and associated emissions. A recent report accused Bolsonaro of crimes against humanity, both for his handling of the Covid pandemic and his alleged involvement in the destruction of the rainforest. The team behind the report accused Bolsonaro’s government of plans to "systematically remove, neuter, and eviscerate laws, agencies and individuals that serve to protect the Amazon".

Of the leaders that will be attending the conference, there are still many who may face criticism for their commitments to climate action. With the United States producing 11% of global emissions, second only to China’s 27%, President Joe Biden may have to demonstrate genuine dedication to reducing emissions at the event. Australia and the UK and respective Prime Ministers Scott Morrison and Boris Johnson will also have to prove their commitments after a leaked email earlier this year revealed that the UK had been willing to drop climate asks to secure a trade deal with Australia. 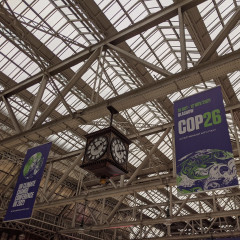 World leaders – absent and present – are facing criticism for their level of commitment at the climate summit in Glasgow.