Former health secretary Matt Hancock has had a UN job offer withdrawn, one that would have seen him in the role of UN special envoy to help Covid recovery in Africa. Hancock had announced the news of the job offer last week, on the same day that a report was published that investigated the failings of the UK government in handling the pandemic.

The MP announced on Tuesday that he was “honoured” to be helping the UN’s economic commission for Africa (Uneca) in the continent’s Covid recovery. However, by Friday the official spokesperson for the UN announced that the offer was “not being taken forward” and the Uneca has removed the press release announcing Hancock’s appointment from its website.

On Saturday Hancock claimed that the offer had been withdrawn due to a technicality, saying, “The UN have written to me to explain that a technical UN rule has subsequently come to light which states that sitting members of parliament cannot also be UN special representatives […] Since I am committed to continuing to serve as MP for West Suffolk, this means I cannot take up the position.” However, sitting MPs including former prime minister Gordon Brown in 2012 have taken UN posts.

The Uneca had previously appeared extremely positive about Hancock’s appointment, saying that he had received the offer due to his “economic policy expertise, experience operating financial markets at the Bank of England and in-depth understanding of government and multi-lateral through his various ministerial cabinet roles”.

The loss of the role will likely be a deterrent to Hancock’s attempts to revive his career following his resignation as health secretary in June, after it was revealed that he had been flaunting lockdown rules by having an affair with his parliamentary aide.

When Hancock’s appointment was initially announced last week, campaigners objected to the news due to allegations of poor handling of the Covid pandemic, allegations that were supported by the report released that same day highlighting the government’s failures in effectively tackling the pandemic, particularly in its early stages cost thousands of lives.

Hancock was directly targeted concerning his failures and transgressions as health secretary by Global Justice Now, who tweeted: “Matt Hancock blocked international efforts to allow low- and middle-income countries to produce their own Covid-19 vaccines, leading to millions of global south deaths. The audacity of this man claiming to help African nations and promote sustainable development is sickening.” 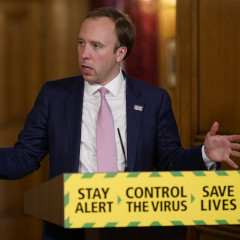