Ward is one of three artists supported by this year’s Creative Talent Programme.

How would you describe your work to anyone unfamiliar with it?

My short film work explores modern childhood and adolescence. Dead Susan, my first, revolves around an intense friendship between two eleven-year-old girls that reaches a deadly extreme and my second short, I Love You Only A Little, starts with an estranged father turning up on his teenage daughter's doorstep after years of absence, while another I'm currently writing explores the toxic underbelly of a teen internet subculture.

How important is the kind of support provided by Creative Youth?

It’s hugely important, it can be so hard to manage a project entirely on your own and being a young early-career artist often means having to wear several hats at once. Support can really make all the difference and can break down barriers like not having a pre-existing network of peers that can advise on project-specific roadblocks that pop up.

What have been your experiences with trying to access support in the arts before?

I’ve been supported on some great schemes like Shortflix and the BFI Residential which have greatly improved my craft, but gaining support and funding for a specific project has always eluded me previously; it’s so difficult as there’s so few of those early career opportunities for filmmakers and there’s more competition for those slots than ever. The application processes often require already having a producer on-board which adds another layer of difficulty and can mean the project lives or dies based on your ability to network.

What part of the Creative Talent Programme are you most looking forward to having access to and why?

The workshops, I think they’ll be a great opportunity to improve my craft as a director before shooting, and are quite unique to the CTP programme.

If you’re able to say currently, what are your plans for the work you are going to create during your time with the programme?

I’m making a short film called Quiet Hands in which an autistic woman confronts a childhood trauma when her granddaughter starts a modern version of the therapy that hurt her. It will explore autism, ABA (Applied Behaviour Analysis), and abuse.

Do you have any plans for after you’ve finished the programme/your career moving onwards?

My ambition is to write for children & teen TV dramas.

The Creative Talent Programme was launched by Creative Youth in 2009 to identify young and emerging artists and companies who have the potential to become excellent creative practitioners and give them the artistic, business and strategic support to become flourishing, challenging, exciting organisations of the future. 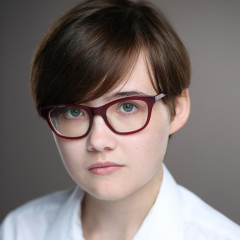 Ward is one of three artists supported by this year’s Creative Talent Programme.