When did you decide to get into animation?

I hadn't intended on forming a career in the world of animation and subsequently licensed merchandise and marketing. I graduated from drama school, worked as an actor and then moved into the production side of the industry before joining Magic Light Pictures 9 years ago. I stared as a production assistant, the company was very young and soon acquired the rights to make the Gruffalo films. It took a few years of development, then production, alongside building the licensing programme before it became as successful but I felt from the beginning that The Gruffalo was something very special. Created by Julia Donaldson and Axel Scheffler it's a magical world to work in and that's when I knew I was very lucky to have a career in the world of animation and branding, having the opportunity to delight audiences around the world with our films and products.

Did you always believe you could make a career of it?

Truthfully, not all. I was unhappy working as an actor but knew I wanted to work in the film industry. I considered studying again but with the costs attached and the time it would require, I decided the give up my day job and started work experience with a number of production companies. It took a few years of very low paid work before I felt I could call what I was doing a career. I've been fortunate though to become part of an amazing company that has real quality at the heart of everything we do. I certainly have a career now and I love it!

What is the biggest challenge working on a project as large scale as Latitude?

We want to deliver a fun and engaging workshop that the young people will enjoy. Hopefully they'll gain a better understanding of the film making process and we'll inspire them to be creative and think about careers in the industry. Although not really a challenge, our focus is to make sure everyone has a good time.

How is it different working on a festival, to say a film like The Gruffalo?

The main thing about animation, is it's very slow and little parts can take a long time to perfect. I know there is a of lot planning with any festival, but it all happens relatively quickly and I'm not sure I could work at that pace anymore!

The most enjoyable part continues to be watching the films we've made with the audiences they were created for. To see young people (and quite a few older ones) embarking on the journey with Mouse, loving the animation and enjoying the humor is always so rewarding. Particularly 6 years after we made the first film.

What advice would you give to any young people wanting to get into animation?

For the me, the most important part of film making is telling a good story. I would recommend reading lots of story books and thinking about the stories you want to tell. There are so many ways to make your own short films, whether on your home computer or someone's smart phone. Join your Film Club in school and watch as many films as possible to begin to understand what type of animation interests you. But most of all, be as creative as possible and let your imagination run wild.

Want to know more about being a director? Check out Creative Choices, the arts careers website, and the profile here 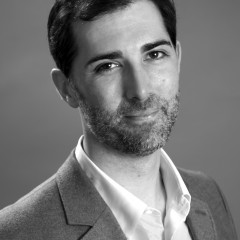