Voice MagInterviewsWant my job? with Pu…

Hi! I’m Emily and I’m the (relatively new) publicity assistant at HarperFiction, I started at the end of March.

A lot of my job revolves around interacting with media contacts and bookstagrammers and sending out books, something that I love doing. I’m also in charge of some of our social channels (@harperfictionpr on Instagram and @fictionpubteam on Twitter), and as well as that I help to organise events for authors. At the moment we’re organising our HarperFiction Summer Series which will be a series of online panels discussing everything from female deception to summer murder mysteries!

What are the highlights of your job to date?

One of my highlights so far has definitely been organising our showcase which took place in May. It involved inviting all our media contacts, helping with assets and also sending books and little treats out to those who were attending, as well as shouting about it on socials. I love organising and planning events so this was so up my street!

What was your path into this job?

So after my undergraduate I did a masters in Modern Literature at Edinburgh. After that I did a series of internships and worked at Waterstones, as well as volunteering for the Amnesty Bookshop and writing a column for Feather Pen Blog on independent bookstores. This was all super useful in that each different role gave me great experience which I could then bring to all of my applications.

In 2019 before I accepted my place at Edinburgh I actually went to an assessment day at HarperCollins for their graduate scheme – I arrived twenty minutes late because I got lost and didn’t have much experience at the time, so obviously didn’t get through to the next round, but I think that it did mean they remembered my name when I was next applying for roles with them!

Can you describe your biggest challenge so far in your job? How did you overcome it?

I think that the biggest challenge that comes generally with starting a job at the moment is the online element of it. It’s definitely been weird starting my first job without being able to meet everybody like I would usually. I’m really lucky in that my team is super great, and I’m able to go into the office a couple of days a week now, but it’s definitely quite jarring only knowing people over Zoom. Being in the office is strange then as well because you see people that look very familiar but because you’ve just met them online and they’re wearing a mask in the building sometimes, it’s hard to really recognise them!

What do you think are the barriers facing people who want to enter the publishing industry?

One barrier that does definitely stop some people is the location of publishing. London is really the centre of it all, and so it makes it much harder to get hired if you’re not based there. I think that maybe the one good thing that has come out of the pandemic is that people will be able to work from home more – so to be honest I think that now it depends on how companies will be treating their working from home policies after the last year – if they become more flexible then the publishing industry will naturally become a bit more accessible geographically.

You also run a ‘bookstagram’ account – can you talk about your experience with this and how social media relates to your work?

So I run the bookstagram account @thingsthativeread (shameless plug right there), which I started in May of lockdown last year. It was originally just meant to be a fun little thing for me to log what I was reading as I wasn’t doing much else, but it actually turned into such a great tool for getting into publishing.

As it began to grow I began to get in touch with more publishers so that I was able to get review copies, which was super exciting. I was also able to start discussions on my posts (I did one on the treatment of women’s fiction in the literary world which is actually something that was brought up in my interview for HarperCollins!) By the time that I was applying for jobs in around March, my bookstagram was such a central part of my applications – because for roles in publicity you are using social media, employers loved the idea of having someone who naturally had that ability and those connections, which I would say is one of the biggest things that I bring to my job now.

Do you have any advice for young people interested in pursuing their own career in publishing?

Definitely. One mistake that I made early on (and which I only corrected myself on towards the end), was not bigging myself up enough on my CV. I’d list what I’d done but not go into too much detail – really make sure to make yourself shine! Definitely a huge asset for me was my bookstagram, so if there’s anything you can do like that then do it – another thing that interviewers really liked was that I worked in Waterstones, so if you get any opportunity to do some bookselling then make the most of it, even if it’s volunteering. Other than that, job hunting can be a real burn out so make sure to have a strong community surrounding you. Quite early on, I joined the Publishing Hopefuls Facebook group (started by the lovely Christina Storey) and that was so helpful both in finding out more about the industry but also making friends who were really supportive. The final thing that really helped me was signing up to the Spare Zoom Project, something which pairs you with a publishing professional who can help you with everything to do with job applications. I had the loveliest mentor and she really helped me to nail everything that I was doing. 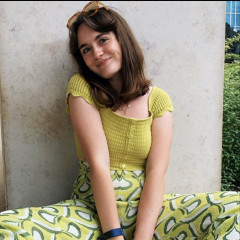