My name is Chloe Potamiti, and I am a 23-year-old filmmaker from Greece. I started practising photography when I was 14, after four years of portraits, events and themed photoshoots I became interested in filming. I had always enjoyed watching films and exploring different genres but never thought that I could make them myself. So I decided to go to university and learn how to. I attended Brunel University London, where I studied Film and Television Studies and graduated in 2020. I am particularly interested in documentary and experimental filmmaking.

‘Human Nature’ was a university assignment for our ‘Alternative Filmmaking’ module. We were encouraged to use experimental forms of filmmaking to tell a story without a typical narrative structure. I formed a group of three, with my friends Hannah and Jenny, and we decided to explore the relationship between humans and the environment. We wanted to show our connection to nature and our surroundings, through overlapping visuals and connecting images through colour and similarities. We live as if we are alongside nature, when really we are part of it. We end on shots of plastic pollution, Extinction Rebellion protests, and finally melted icecaps. This aims to remind people that when we forget to co-exist with nature, we destroy it.

When we started discussing ‘Human Nature’, Jenny had been inspired by some artists online who would place photos of people and nature next to each other, or over each other, to symbolise their connections. We decided to use a similar technique. First, we filmed footage of our faces and bodies, in different lighting and colours. Then we researched free footage online that we could use, of things we couldn’t film ourselves. We searched for all main elements first, such as fire and water, and then searched for more videos based on our footage. Editing was really fun since we could play around with so much beautiful footage, and combine it with music by my friend Jose.

The film was finished in a rush. We had one or two more editing sessions planned when the pandemic started getting bad, and the university closed down. I had to rush to the university editing suites, throw on some credits and export our project a day before lockdown. We are still very happy with how it looks, but it would have been nice to have that extra day or two to perfect it together.

I feel particularly proud of the lighting when watching the film. We did a lot of experimenting with it and trying different filters and effects. I think it looks very pretty, but it was also fun to do. If we’d had more time, we might have filmed someone submerged in water, to match the shots of the ocean. We had hoped to plan a short trip to the sea to film underwater, but unfortunately, we didn’t manage to do this before lockdown.

You can watch Human Nature on Voice right now, as part of our Winter Film Festival. 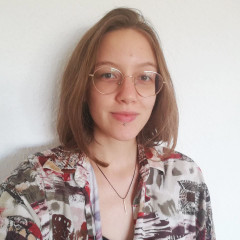