We are Roseanna Anderson and Josh Ben-Tovim, speaking here in one voice !! We met at the Rambert School, and have been making work together, predominantly for the stage, but increasingly for film, for the last 10 years, often in collaboration with other artists under the banner of our company –IMPERMANENCE.

Our film, BLAST, is a non-linear, pseudo-political, dance-theatre-film response to a 100 year old eccentric magazine.

What inspired you to make BLAST?

BLAST is inspired by an incredibly odd and wonderful magazine printed in 1914 of the same name. It contains various short stories, a manifesto, prints of paintings and numerous poems. We tried to distil something of its energy into a 5 minute film, looking to create a contemporary experience which provokes thinking around Fascism, Violence, Hope and Tragedy.

What was the creative process behind BLAST?

It was a very quick process, almost anarchic in how the different elements came together. We worked closely with our DOP Jake Duncan and incredible producer Freya Billington. There was a brilliant young crew on board, mainly from the University of West of England, who were all phenomenal and amazingly enthusiastic.

There are three main threads which run through the film: The Artist, The Lovers, The Dancers.

The Artist is a reflection of Wyndham Lewis, a writer and painter who edited the original BLAST magazine. We have him transform into a sort of cabaret Emcee during the film, pointing at the similarities in form between Magazines and Cabaret. He is left bewildered, as though the revolutionary energy he was propagating has run away from him and is now wildly out of control.

The Dancers represent youth, masculinity, and the many millions who would go on to lose their lives during WW1. The choreography is borrowed from a longer work for the stage, where we used one of the short Plays in BLAST as a score to create the movement.

The Lovers are an abstraction of two characters in another story included in BLAST which ends with a suicide. We decided the Lovers should function as an allegory for Hope and Peace, and thus, when the woman jumps from the top of the building, the caption reads, “AND SO THE FUTURE FELL”. This was before Covid, and all the other shocking developments of 2020. So although we maintain hope for the future, it is through the guise of Gramsci: “Pessimism of the intellect, optimism of the will.”

We’ve created various projects which have looked back at artistic artefacts from historical periods. Our stage show DA DA DARLING was based on Max Ernst’s anti-establishment 1930 collage novel A Little Girl Dreams of Taking the Veil. THE BALLET OF THE NATIONS – a 50 minute film we made – was based on a book of the same name created in 1915 by Vernon Lee, a pacifist writer and early feminist. And BAAL, another stage show we’ve toured internationally was based on Brecht’s play circa 1918. Something about the notion of centenaries, albeit loosely, has always given us energy to work with. It feels like so often the idea of progress is an illusion, and looking back in time at what people were making just outside of living memory is a fascinating way to understand something more about the world we are living in now.

We’ve taken a funny old road over the last 10 years, but have always tried to make as much work as possible, and get it out to an audience as regularly as we can. This has meant staging lots of our own events, and not letting venues decide when / if / how the work can be made and seen. Of course, we’ve tried to make lots of partnerships and relationships with organisations and venues, but have always tried to stay autonomous and carve out our own path. Someone did tell us early on, “make what you can – now”, and that has always been a good touch stone… basically, work with what you’ve got, and get on with it!

Also, guess it would have been useful for someone to tell us that there really is no silver bullet or right way to make it work, and everyone, no matter how big, is basically making it up as they go along. So, yeah, apply creative thinking to every aspect of making stuff, and take care of the people around you.

We also reviewed BLAST and you can read our thoughts on it here. 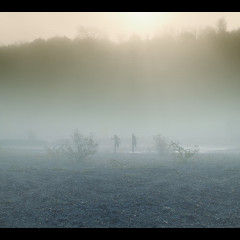