I'm Livi, a music student studying at uni and my film is Folk, a short about a young adult coming home and reconnecting with her father over their shared love of music.

What was the creative process behind Folk?

The creative process was a true collaboration with Lisle Turner (the writer and director) and Will Cookson (the composer), with the three of us working so that the true story could be conveyed through the music. The beauty of being able to do a film with practically no words is that the narrative hinges so strongly on the music and the visuals, so the collaborative process was crucial in creating one unified work.

How important is music to our relationships with other people?

I think more important that most people give it credit for! Music plays an important factor in day to day lives, whether it's underscore for film and tv, background music in retail stores or the inane advert jingles that get stuck in your head for days on end. People can bond over their shared love of a band or an artist, or you can lose your voice screaming Mr Brightside on a night out with your mates; music underscores our day to day lives in a way we don't really see anywhere else.

What's your relationship with folk music?

I've grown up surrounded by folk music. My dad and his side of the family are Scottish, and he's a folk musician so it's in my roots! It's also tended to be a big part of music I like listening to; for example, the soundtrack to How to Train Your Dragon by John Powell has been one of my favourites since its release, and its Celtic moments are one of the main reasons why. Folk's also been an important factor in most of my work, as it's been a clear influence in any music I write. For me, folk is a reminder of Scotland and where I come from, as well as being a tangible link to my family.

Who are some folk artists we should be following?

I'm hilariously bad at keeping up with contemporary music, but classic musicians like Leonard Cohen, Joan Armatrading and Joni Mitchell use folk in their music all the time. Also contemporary musicians like Jacob Collier, who is largely jazz-inspired but has some brilliantly folky songs in his album Djesse Vol. 2, such as Sky Above and Time to Rest Your Weary Head (my friends will be rolling their eyes, I cite him way too often).

Do you think folk should get more mainstream attention?

I think it already does, just not in the way people expect. One of the great aspects about music is how it adapts and evolves with the times, so while it may not be overtly clear in mainstream media it's around if you look for it. Folk music can underscore a lot of various popular genres, like Ed Sheeran employing his Irish roots or in various film scores (like How to Train Your Dragon as I said before). However, it would be nice to see some indie-folk artists getting more widespread attention.

We also reviewed Folk, and you can read our thoughts on it here. 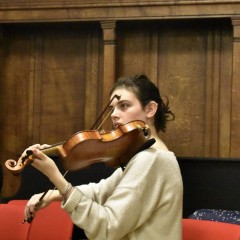