Could you first introduce yourself to the reader?
Hello there, my name is Stephanie Ware, I'm an actor, writer and cabaret artiste and compère living in London. I trained at The Bridge Theatre Company and have specialised in comedy, physical theatre and clowning. I've been performing on the cabaret scene in London for 10 years, and am about to do a run at VAULT Festival with my first full show: an action-packed, spy-thriller comedy musical: How Eva Von Schnippisch Won WWII.

What’s your show about?
How Eva Von Schnippisch Won WWII is a story about Germany's greatest underground cabaret star, who is trained and transformed into Britain's number one spy, and ends up winning the war single-handedly. It's also the tale of a strong sexy woman doing anything to survive, and desperate for true love and recognition.

What inspired you to create the show?
I was inspired by the female SOE (Special Operative Executives), the 'normal' women (librarians/mothers/nurses) who were hand-picked and trained by the British Military to conduct espionage, sabotage and reconnaissance in occupied Europe. These were fiercely brave women who willingly walked into danger for their country. They are the unsung heroes who really won WWII.

I am half German which is why I have written the story from a German angle. I am constantly meeting people who think that all Germans agreed with what was going on in their country, which is of course completely untrue. Many Germans did what they could to fight the regime. On Kristallnacht (a famous night where the Nazis smashed all the windows of Jewish businesses and went on a murdering spree) my Great Grandmother who was well respected in the community (there is now a street named after her in her home town Hadamar) stood at the bottom of her stairs as the SS Officers demanded to search the building, she refused to let them enter by saying "Over my dead body"...the SS officers knew she was well-respected and left, and she saved a Jewish family living in her attic.

There are many stories like this, so I am trying (in my own small way) to make people realise that there were Germans stuck in a national situation that they didn’t like, and did what they could to fight it. I have found that since Brexit and the Trump situation, people have found it a bit easier to understand how it might feel to be in a country ruled by someone they don’t agree with, doing things they didn’t agree with on their country’s behalf.

How was the character of Eva Von Schnippisch born?
Eva is a long-standing comedy character of mine that I have been performing for over eight years. Everyone loves Eva. Being half German she is the product of seeing the differences between the Brits and the 'Krauts'. She's a fierce femme fatale, and doesn't suffer fools gladly. She is an inspiration, and the woman I haven't got the guts to be. Yet.

What is it about comedy that you enjoy?
There just quite simply isn't a greater feeling than making a room full of people laugh. If you can make them laugh, cry... and then laugh again... then that's the stuff dreams are made on, and this is what I try to achieve in my show.

Why do you think comedy is important?
Apart from the obvious - being a vehicle of escapism for people by taking them away from their troubles and their woes - comedy is important to make people rethink their opinions. You can tackle, or at least highlight some major issues by being silly and poking fun at things. Whilst my show is a light-hearted, tongue-firmly-in-cheek comedy; it's ultimately trying to teach the audience that there were many brave women putting their lives on the line by becoming spies, and some of those heroes were Germans fighting against the regime from inside a country under a dictatorship. Pretty heavy stuff really, I just sugar coat it with silliness and sausages.

Have you always wanted to be a performer?
Yeah - it's a cliche, but I've been performing since I was a kid. I remember my German Opa (grandad) stating that I was going to be an actress after watching me warm some milk on the stove. God knows what I was doing, but he saw the performer in me and made the call early on.

You perform at a lot of festivals like VAULT and Edinburgh Fringe - what do you like about performing at festivals?
I mean there's just nothing like it. The camaraderie of your fellow performers, the blood, sweat and all those tears! It's high octane, in for a penny in for a pound stuff... although I wish we made more pounds!

What advice would you give to young people who want to get into a career in the arts?
Don't hold back and just keep going! Computers are going to take over everyone else's jobs soon enough, but they will never replace the human entertainer. And always remember - you may not make millions, but you'll be rich with the knowledge that you're doing what you love!

Thanks so much to Stephanie for taking the time to do this interview!

You can visit Stephanie's website to learn more about her characters and performances. Tickets for How Eva Von Schnippisch Won WWII a the VAULT Festival are available here and a trailer can be seen here. 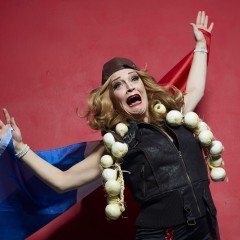