Voice MagInterviewsBehind the scenes at…

Hello Matt! Could you introduce yourself to the reader?

Hello! I'm a playwright and screenwriter from Dorset. I've had full-length plays on at various theatres, such as: Soho Theatre, Finborough, Arcola, and Edinburgh Fringe, and shorts at The Bunker, the Orange Tree, and Theatre503. I'm currently writing a new play set in Dorset, and developing a couple of TV pilots. My favourite play is Angels in America, my favourite playwright Caryl Churchill.

This is your first time back at the VAULT Festival following your debut in 2015 with 'Two Roads'. How does it feel to be back?

So I was also at VAULT, briefly, in 2016 with the brilliant PLAY Theatre Company. I devised a short piece with a director and 3 actors, and it was one of my favourite shorts I’ve worked on. The PLAY producer Becky is back at VAULT this year with Work Bitch, by Jess Siân, which is going to be brilliant.

But yeah, it was great to be back! There’s so much going on, it was fun to be working alongside this huge range of artists. It’s exciting to walk out of your show and straight into something radically different, like stand-up or cabaret.

Are there specific societal issues that you deliberately want to bring into your work, or do write without these in mind?

I don’t start plays with societal issues in mind. I tend to write about strange, tense situations with characters that interest me, and then I start to mine the situation and the characters’ perspectives for what they might say about society.

The Noble Nine began as a play about lots of weird cousins. Then it started to feel like a horrible take on children’s adventure classics. Then it started to feel like an exploration of nostalgia today, and the rhetoric some politicians use to talk about Brexit. The director and I tried to flesh out each of these angles equally, but especially to keep asking what it was saying about Britain today.

Do you feel that there are topics which you will definitely refrain from exploring tackling in your work?

There are a huge range of topics that I can’t immediately imagine myself writing about, as I don’t know what I’d add to the subject, or I’d feel like there are others better placed to do it. But depending on what kind of play you write, you can find the piece touching, even tangentially, on issues that you aren’t setting out to tackle. Also, you never know what knowledge or interests a collaborator will bring, which can open up the work.

Do you face writer's block? How do you tackle this?

There are periods where I write less, but I try not to force myself to write at those times, so it’s hard to describe it as block. It’s more that at some points I’m engaged, at some points I’m not. The things that help most when I’m struggling with an idea are time and space away from it.

Alongside VAULT Festival, you've also worked on 'Alice in Wonderland' for the Edinburgh Fringe Festival. VAULT is known for being unconventional, therefore do you use festivals as a platform to be more experimental with your work?

VAULT is a brilliant place to experiment. I think the audience expects it, and the festival is a very forgiving platform for new work. But I don’t limit experimenting to festivals. Opportunities to experiment – and just to make any theatre – can be rare, so I do that whenever possible, and I’ve had great experiences with other venues. The Orange Tree Writers Collective was a wonderful place to experiment, as they were generous with opportunities to stage short pieces. Jam wasn’t especially unconventional in terms of its form, but I think was in terms of its tone. The Finborough were very much behind that.

As a graduate of the Royal Court Young Writers Programme and the Orange Tree Writers Collective; what piece of advice do you think will stay with you throughout your whole career?

Most of the things that have stayed with me from those groups are writing exercises and bits of dramaturgical advice. I think the best thing that stays with me from both was the atmosphere of each of the theatres – their sense of enquiry. I wrote two of my favourite of my plays on those groups, I think because there was the push to challenge ourselves and aim big with our subjects and our dramaturgies.

You’ve been granted the ability to send a message to 16-year-old you [woohoo!]. What do you say?

Change up your haircut. Go travelling after school. Try a range of jobs after uni, and try to find pleasure in that.

What advice would you give to young aspiring playwrights who want to be published by Oberon Books amongst the other wonderful things you've done in your career?

Read loads of plays. Watch as much cheap theatre as possible. Start making work, in any form. Find people who like that work and make it for/with them. Make work outside London. Learn how to fundraise. 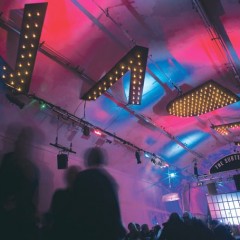 Behind the scenes at VAULT Festival – with playwright Matt Parvin