Voice MagInterviewsWant my job? with Ha…

Electronic musician and one third of Haiku Salut, an instrumental band from Derbyshire, Sophie Barkerwood has performed worldwide and collaborated with a variety of artists, including Grawl!x and Public Service Broadcasting.

In 2011 Haiku Salut released their debut EP, after Barkerwood met her fellow bandmates at university, followed by debut album ‘Tricolore’ in 2013 and later ‘Etch and Etch Deep’ in 2015. Now signed to experimental electronic label PRAH Recordings, the trio released their third album, ‘There is Nowhere Else’ (2018), earlier this September.

Giving her advice to aspiring musicians, Barkerwood reveals what drives her to make music, the practicalities of touring and what food you should eat along the way.

How did Haiku Salut come about?

We've been friends for a long time. After a few collaborations and projects with other musicians we decided we wanted to try and do something a little bit different. Louise [Croft] got an accordion for Christmas in 2010 and Haiku Salut was born.

Huh, just like that! What drives you to make music?

I love experimenting with new ideas and merging music and science together. This year we've written a piece in collaboration with a robot orchestra and have been on tour with our lamp show. The lamp show is a show with twenty-five or so charity shop lamps; they are wired into my sampler and flicker and dance to the music, like a haunted living room.

You’ve performed all over the world. What challenges have you faced along the way?

As we span a lot of different styles, we have struggled to get a booking agent. We've booked all our own tours, which has actually been a really positive experience. But it does mean less time writing music and doing the thing we enjoy most.

Can you share with us some of your career highlights, on- or offstage?

We guested with Public Service Broadcasting at the Royal Albert Hall which was very overwhelming! My personal highlight was when Jarvis Cocker played us on the radio and when we played in Tokyo and met Mitsuo Toyama, who illustrated our music video for our song Glockelbar.

Incredible! Besides Cocker and Toyama, who do you look to for inspiration?

It changes all the time, but currently [musician] Ian William Craig. Shugo Tokamaru and Dan Deacon have influenced our previous albums.

Do you have a formal training in music?

I don't have any creative qualifications. I am self-taught on piano, guitar and accordion, as well as all the production side of things too. I find that because I don't have a framework in my head from which to write music some really weird and unorthodox ideas can come out.

The other two have grades in piano and classical guitar, but I don't think they would necessarily say that has helped them career-wise.

I would like to continue working on blending the boundaries between music, art and science. We like to think of new ways to perform and engage with people.

Any advice for those hoping to follow in your footsteps?

Have your writing space set up and ready to go, be nice to people, don't let anyone say you can't, and eat bananas on tour. 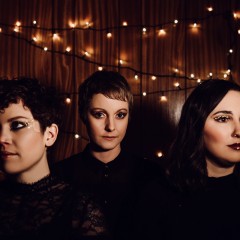