How did you come to be involved in Soweto Gospel Choir?

With the commemoration of Nelson Mandela's centenary, Soweto Gospel Choir found it fitting to revive peoples memories about the immense sacrifice and contribution he made towards liberation, by singing some of the more popular struggle songs, lest we forget.

Our repertoire includes other fallen heroes whose role was an important factor in leading the populace during the days of banishment and exile of the major struggle organisations.

I love my career because it affords me the opportunity to express the feelings and thoughts within me that I cannot express in everyday language.

It also gives me the chance to reach the souls of other people in a way that only music can.

I believe music is a universal language and has the power to unite, build, restore people's lives.

So it overwhelms me seeing people reacting positively to my music.

What are the challenges you've faced so far?

The schedule of performances is usually very tight, resulting in not having sufficient time to rest and recoup strength for following performance. Also, the difference in time between countries on our tours makes it difficult to recover from the fatigue of the previous performance. Lastly, choir members become home sick from the long absence from home and family.

It's difficult to single out any particular performance as 'the highlight' because we try to tackle each one with the utmost commitment and vigour and then await with humility a unfavourable outcome. However, The Presidential inauguration of Present Zuma in Pretoria, Union Building.

Performing and meeting Nelson Mandela at the 46664 event In London and Johannesburg sticks out as does working with national and international artists such as Jonny Clegg, Aretha Franklin, Queen, Will Smith, Stevie Wonder, Jimmy Cliff, Deborah Cox, Oprah Winfrey, Elton John, Bebe Williams... the list is endless.

Being awarded two Grammys and an Emmy award was pretty amazing as well.

For me, as an individual I derive my love for gospel music from various sources in South Africa as well as from artists from abroad. South African music, especially Afro churches, have an approach and rhythm that is captivating and singing style that is truly South African and in a class of its own. Sects such as Zionists have a rich vocal and dancing pattern that are a wonder to behold. South African Jazz musicians such as Themba Mkhize also played an influential role in shaping my approach to gospel music.

Do you have any creative qualification? In what ways do you think this has helped you in your career?

I studied popular and classical music. I have a diploma in theory of music, from of music, jazz history, keyboard and piano technique, arranging both vocal and instrumental and production. The studies helped me build a firm foundation for my involvement in music and to broaden my outlook musically.

To create a platform for up and coming musicians to realise their dreams. To establish a music school where the basics and theory are taught to help other potential music artists.

Do you have any tips for other people looking to follow in you footsteps?

In your endeavours to reach your ambitions, do not fear to make mistakes along the way, for it is learning from past mistakes that great heights are reached.

... and check out this review of the Soweto Gospel Choir from Edinburgh Fringe Festival. 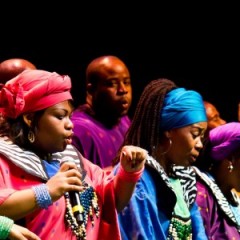