I spoke to comedian Tom Houghton about performing at the Fringe, his fascinating upbringing and how to get into stand-up comedy

Could you first introduce yourself to the readers?
Hello readers. I’m Tom Houghton. Technically The Honourable Tom Houghton. Middle names are William Reynolds- hang on, how deep are we going with this? My name’s Tom, I’m 33, I’m a Sagittarius, I’m looking for love…

I think we’re all best friends already! How long have you been a stand-up comedian?
This is my 11th Edinburgh Fringe. I had nine years with my group, called The Noise Next Door, and then I left them because I wanted to have all the attention and money myself, and this is my second EdFringe as a solo act.

What’s your show about?
So, I’ve just been given the title ‘The Honourable’, through no achievement of my own. My dad got made a Lord, so I get it by proxy. The show is about that, really.

What do you like about the Fringe?
I like the Fringe because to me the Fringe is like end of year exams. It’s where you get all your marks; like, oh, you got an A this year, well done! Plus, I think it’s important to write a new hour every year. An hour a year seems a perfectly reasonable ask. It’s also the one time a year I’m in a city in the same place for a month, not travelling around, and all my friends and favourite people are here. And it’s like…it’s like a month-long freshers week, and you’re a second year.

I haven’t been to uni yet…
Well you come back and you know the place, and it’s like freshers because everyone’s really excited and it’s just a big party.

Is Fringe different to other types of performing?
Yes, absolutely. I think it’s harder up here. People are more critical. When you gig outside of the Fringe people won't have been in the theatre for a while so it’s exciting, whereas here its their fifth show of the day and they’re like ‘Next’. All the magic’s taken out. You see a lot of performances in every genre which are a similar sort of thing, so more and more you have to try and make yourself unique and stand out from the pack.

And how do you try and do that?
I’m very lucky in that I’ve landed on some very original premises: living in the Tower of London; being ‘the Honourable’; my dad being ex-chief of the military; going to boarding school from age six. I’m really owning the posh privilege card.

Which is good, because denying it is ridiculous!
Yeah, I think so, and people don't actually mind. What people don't like is people who aren’t self aware and pretend to have a hard life; no you don’t, you’re fine. There's never not brie in your fridge.

You’ve had a fascinating life; what was it like growing up with a dad who was Chief of the Defence Staff?
It’s only really when I talk to people about it that I realise how mental it was - you don't notice it’s mental because it’s all you know. People ask if when I moved into the Tower of London it was insane and the answer’s no, because before that it was Kensington Palace, you know? And I grew up in army barracks in Northern Ireland, where we had bodyguards and armoured plated vehicles and got escorted everywhere with everyone saluting everyone. But then people ask, ‘what, what do you mean you’ve got a guy with a gun outside your door every day?’ Umm yeah, that's Terry. It just felt normal, and now I realise it isn’t. I want my show to, well, show that I’m an ordinary bloke who’s been caught up in an extraordinary situation.

In the show, you talk about the three times you’ve been arrested; why did you decide to talk about them?
With a title like ‘the Honourable’, it felt like the correct thing to do. I was talking to Daniel Sloss actually, who’s a friend of mine, and we were talking about a show he did recently about his disabled sister, who died, and he said his comedy improved when he started trying to tackle the most horrendously low points of his life. So, I thought about the most dishonourable I've ever felt, and it was then. And I decided to see if I could make a hilarious show with it in.

How long did it take to write the show?
About eight months.

Did you find it harder than other shows?
No, actually, it was fun. I only actually put the times I’d been arrested in reasonably late, and then that became an integral part of it. The show was originally going to be all about my mum, but then the more I wrote the more my sister became a bigger part of it. And my parents and sister are coming tonight with 17 of their friends, so it’s going to be quite the show!

Have they seen it before?
They’ve seen a preview but not what it is now. I’m really nervous. I think I’ll get a bit choked up. I’ll try not to cry!

You’re allowed to cry! Why do you think the arts are important?
They can't not be. They’re the thing that transcends cultures and brings us all together, and makes us question who we are and what it’s all about more than anything else.

When did you realise that you wanted to go into the arts?
I got an art scholarship to my school, and I wanted to be an artist; then I really enjoyed musicals and plays, and then I realised that I was always going for the comedy roles. I like comedy because you get reviewed instantly. In a play you have to wait until the end and then ask people if they liked it, whereas in comedy you know with every joke if it landed or not. I like acting, but with comedy I got to be myself and I got to write my own script. So then I did a Masters in stand up comedy, after getting my 2:2 in drama. and now I haven’t got any transferable skills so I have to be a comedian forever!

What's after Fringe for you?
I finish the Fringe and I fly straight to Sweden to do a festival there. Then I’m coming back and doing Comedy Central Roast Battles against Lauren Patterson, which is very exciting, and then me and my family are all going to Morocco!

Well, that’s the show for next year sorted!
Oh, I’ve already started writing my show for next year. I think I’m going to explore boarding school. My school was an all boys boarding school with 700 boys, and mine was the first year they let girls in. 22 girls joined, which as you can imagine was insane. and at the time we were all listening to Busted, so I’m going to call it ‘That's What I Go To School For’. I should probably do a show about living in the Tower of London at some point as well. People don't believe I really do. You should try ordering a Domino’s. It’s impossible.

Well, it must be hard to deliver a pizza there…
I have to go out the battle-gates to get it. My walk of shame is two battle-gates and a moat. One time I was doing the walk of shame back through the Tower and the historical reenactment society started yelling ‘for shame!’.

You’re never going to run out of material! What advice would you give for young people who want to get into stand-up comedy?
Just do it. It sounds stupid, but the best thing you can do is find an open mic night and just get yourself on there, and keep doing it regularly. You’re going to be rubbish at the start; everyone is, so don’t worry about it, just worry about getting stage time because that's the only way you can get better. And don't try and imitate anyone else, just write what you think is funny. Eventually you’ll figure it out, and I’ll see you up here when you do!

Many thanks to Tom for taking the time to do this interview! Check out my review of Tom's show here.

Tom Houghton: The Honourable is on at 20:10 at Pleasance Dome until August 26th. For more information and to purchase tickets, visit the EdFringe website. 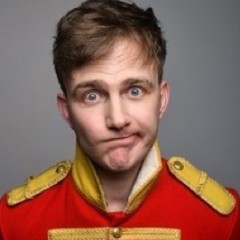 I spoke to comedian Tom Houghton about performing at the Fringe, his fascinating upbringing and how to get into stand-up comedy