Dan: We're with the Young Pleasance company and the show we're doing is called 'Curse of Cranholme Abbey'

Could you briefly describe the show?

Vee: 'Curse of Cranholme Abbey' centres around the abbey - which is located in the Somerset area - and it's set across three time periods: the 1870s in the Victorian period, the 1940s in the height of the Second World War, and finally in the present day, around 2013. We see how the curse transcends across the family line of the Cranhams, and how it affects the individuals who encounter the curse.

Have either of you been to Edinburgh Fringe before?

Dan: This will be my third Fringe with YP, and I'm really looking forward to it!

Vee: I'm the complete opposite; I'm not an Edinburgh Fringe veteran like Dan and this will be my first time ever going up to the Fringe, let alone performing in it, so it's a really exciting time. There's such a wonderful reputation and it's really great to have that opportunity to be a part of it for the first time.

Dan, having been there before, what do you think is special about Edinburgh Fringe?

Dan: I think - something that's great about the Pleasance in general, but also the Fringe as a whole - it's such an exciting experience; the sheer volume of creativity and different creative people is such an exciting atmosphere to be in, and it's great to meet with people your age with a similar attitude. Taking a show up and rehearsing with a company with the level of professionalism that is necessary for the Fringe is such a refreshing change from, say, school drama. It's a full-on, genuine, real theatre festival with paying guests, and that danger and excitement of getting people to come to your show is amazing.

Vee: And I think with the presence of such cuts to arts funding and the marginalisation of arts education in the school system, YP are really unique in giving people under the age of 18 that opportunity to do a near-full Edinburgh run; putting a show together in so little time, but then also allowing it to develop over such a long run. My school didn't have a drama department so what YP has given me is absolutely glorious, and it's wonderful that they're able to be so inclusive.

What else is special about YP?

Dan: What's great about YP is that being part of a company with such a heritage and respect is crazy, and being under the label of the Pleasance is amazing.

Vee: And the story always continues - many people go on to alumni companies, and we have our Ex-Young Pleasance (XYP) programme where people have developed as artists and theatre practitioners and gone on to do amazing things. We're all a massive extended family and that journey continues so there's a real legacy from the company.

Dan: As with every year we have ten days of rehearsals where we come in, we're given scripts, and right from the very first moment we're up on our feet, challenging the text, working together as a company devising, creating and working as a true ensemble to create the piece. Having that limitation of 'five days to go', 'four days to go' means the excitement builds up and up.

Vee: It creates a real incentive as well - we've all worked tremendously hard and you don't even realising how hard you're working. Already after five days we're all completely off book, which would never have happened in any of my previous theatre experience! It's tiring but very satisfying.

Dan: It's great because we are so involved from the very first moment and you do get such a personal connection - you really are able to throw yourself fully into any role and have fun with it.

What are the positives and negatives of doing so many performances?

Dan: So there's the obvious negative of tiring out. It's tricky getting up and working and sweating under the lights - all the difficulties that come with doing a show anyway! But having a genuine, real, Fringe run-

Dan: Yeah we don't have a day off, we do a show every day, and the show really has a chance to evolve. I know from past experience that the whole thing evolves, things change, people get more comfortable with it - it becomes this living, breathing thing that it's really exciting to be a part of. We always moan that we're really tired and our feet hurt and it's raining, but then you do a show or you see that you're selling well or you get a good review, and it completely beats any negative thoughts.

What is it like being a young company at the Fringe?

Dan: I think it gives us a really great perspective because we're not treated as a junior company, we're not 'kids at the Fringe'; you go there and not only are you vying with adults, but people are paying to see your show, and they are paying to see a high-level, good, Fringe show. It's the worst thing in the world to be treated as 'good for a youth theatre' - that's the antithesis of what we want to do - and I think YP is successful at achieving a really high standard of professionalism that is...maybe unmatched...or maybe I'm just being biased!

Vee: I think it's evidence enough that the Pleasance places such responsibility in a company of young people, and they're so rigorous in selecting a company and making sure it's a really good, strong ensemble. There isn't a star show here, everybody is equally valued, and not just in interpreting the roles and the writing but also in creative output. I mean, for example, our crew and some of our Assistant Directors are also the same age as us, so it's not just opportunities for performing, it's also for developing that next generation of creatives and technical practitioners. They're brilliant at nurturing talent.

Dan: YP's great because they'll always find a role for anyone with any interest in theatre, for you to find your own voice.

Why do you think young people are so important in the arts?

Vee: It's about changing voices and saying that it doesn't necessarily have to continue in old ways, change is okay. I think, perhaps, the recent campaigns about diversity in the arts really reflect that because I think young people want to express art and see art that reflects them. With our education system becoming more exam-oriented, I think the arts are important in order to create well-rounded individuals. You don't have to be stunningly talented or want to go into a career in the arts, they just add an extra dimension and I think they make you more human.

Dan: Completely, I think the arts, at their heart, are a deeply emotional thing, and learning to develop that emotional intelligence and the way of looking at the world not just as left-brain or right-brain is incredibly valuable. I think STEM and the other side of the spectrum is equally as important and a synthesis of the two is the most important thing; to not recognise that synthesis is detrimental.

Vee: Exactly; they're symbiotic, they feed into each other. Creative thinkers create innovation everywhere!

What advice would you give to young people who want to perform at the Fringe, or get into the arts in any way?

It was at this point that producer Kathryn Norton-Smith joined us, and emphasised the importance of the entire company working together and valuing each other's input

Kathryn: Somebody sewing on a bit of beading onto a costume is just as important as somebody coming onstage and delivering a line, and one of things we strive to do here is make sure that you as an actor have a sense of the stagecraft that's going on around you.

Vee: I think seeing people your own age doing that technical work gives you a whole different respect - it's not like Mrs Jones at the back, nagging at you, it feels like we're all one extended team. It really does feel like we're on extended family.

I understand you've all had a lot of say in rewriting the script - do you enjoy having that creative control?

Dan: Yeah, some people get a bit precious about scenes, but as the show's been going there's been lots of changes and everyone is just really keen to make the best show possible.

Vee: There's not two worlds at all - actors and backstage - it's all developing together.

Dan: And we have such great resources. Is it wrong to say we're the best-dressed show at the Fringe?!

Kathryn: On and offstage!

Finally, where and when can people see your show?

Vee: We're performing from the 4th to the 19th at Pleasance Beyond, Venue 33, and we have a captioned performance on the 18th.

Vee: Be there, or be a regular quadrilateral.

The Curse of Cranholme Abbey is performing at Pleasance Courtyard at 15:30 on 4th - 19th August. For tickets and more information visit the EdFringe website. 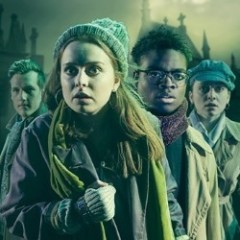