Peter and Bambi Heaven, the triple threat; magic, dancing and more magic! Imagine if David Copperfield and Claudia Schiffer were from Australia's Gold Coast, now roll them in sequins, set them on fire and you're almost there.

Probably watching a martial arts karate show at the Corakai show in 1986. This bloke broke bloody ice with his head! I was totally hooked.

When I saw David Copperfield in Vegas back in 92 I thought this is what I want to do, bloody great stuff.

I was hired as a roving entertainer at Hollywood on the Gold Coast, I had to wear a Speedy Gonzales suit in thirty six degrees heat, I don't remember much.

Mate, bloody everything. It's just a dream come true, travelling all over Australia and doing shows with Bambi, living the dream mate.

There is actually nothing bad about the job, I just love it mate.

I don't decide mate, I just know. Before I go out there I make a decision to do a bloody great job and that's what I do.

I'd have really liked to do a performance with David Copperfield, he was a big hero of mine, so versatile really sad that he's gone.

To be honest, we had a big run of shows in West Australia that fell through after a locust invasion and we just needed to fill our calendar.

Look I've never done shows here before but I don't think so. People are people and they just want to have a good time.

Don't marry Sheree Jamieson, she was a god damn nightmare.

Listen to your elders and work hard. I didn't get where I am today because I was a smart ass with his pants hanging around his knees, shut your goddam mouth and listen for a change.

They can catch us every night except the 15th in the Piccolo at 10:30pm at the Assembly George Square Gardens. 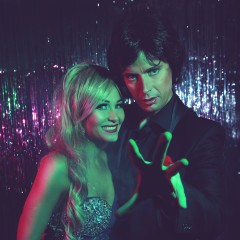