Hello, I'm Phil Nichol (Edinburgh Comedy Award Winner 2006, Stage Acting Award 2005) My show this year is entitled Phil Nichol: Twenty. It is a celebration of my 20th Solo Fringe Hour with a fast-paced, silly, puerile recreation of my favourite bits from all the other 19 hours of stupidity!

I decide to become an actor whilst on a school trip to Stratford Upon Avon in Ontario Canada when I was 12 years of age to watch The Tempest. The audience of children were talking throughout until Nicholas Pennell descended from the gods dressed as Ariel, huge wings floating down with a booming voice captivating the crowd. The whole theatre were stunned into silence. I thought to myself- I want to do that. I want that kind of power. Haha.

I had a fantastic theatre in High School tutor named Frank Luke who ran our theatre department and challenged me to get into theatre. Our school took a production to the Sears Drama Festival year after year and I loved it.

I had a one line walk on role in a teen TV show called Hangin' In on CBC television when I was 16 years old. I hadn't told my parents that I was doing it however my father found out when the cheque was sent to him instead of me as his name is John Nichol and my first name is actually John too. Oops. My first theatrical experience was as an actor's apprentice in Centre Stage's Dream In High Park in Toronto. I played three parts in a production of The Tempest, The Boatswain and the two lower lords. It was great fun as David Fox was the lead and it was directed by Canadian legend Richard Greenblatt. It was a brilliant production and I had a ball.

I make people laugh for a living. It is the most ethically sound job. I make a living helping bring joy and understanding into the world. It can't be beat.

Long train rides and days, weeks, months away from home. As with any self employed person I have little in the way of job security however I live life to the fullest. It'll be over before we know it.

With comedy it's easy. They laugh, it's good. They don't laugh, you've failed.

I was invited by Karen Koren of the Gilded Balloon in 1991 and I've been every year but two. Wouldn't miss it for the world.

Is performing at EdFringe different from 'traditional'shows?

Not really. You have to concentrate on making work with a bit less technically but that often lends itself to making the show stronger because necessity is mother of invention.

Follow your heart, you will succeed. Don't waste time doubting yourself. Confidence is 50% of success. Drive is the other 50%.

Be open minded and humble. Listen, watch and learn. 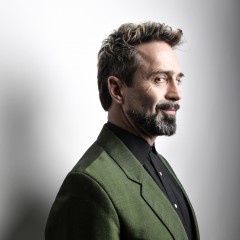