I am Sophie Willan. I've had quite an unusual background growing up in and out of the Care System. My mother's a heroin addict and I've grown up surrounded by eccentric female Boltonians. When I was 23 I got all my records back from Social Services. In the show explore who I am today through the professional opinions that have been written about me all my life.

I remember sitting down with my Grandma when I was about eight and watching A Cream Cracker Under the Settee with Thora Hurd. I loved it! I remember thinking, "I want to be Thora Hurd when I grow up" - I was an odd child.

My Grandma introduced me to film and comedy as a child and encouraged my ambition to be a writer/performer. She was particularly passionate about working class and Northern voices that she felt I would be able to relate to and be inspired by. We watched a lot of Victoria Wood's comedy, films with Julia Walters in and the works of Ken Loach and Mike Leigh.

When I was a child, I used to write and perform comedy monologues to for all the other kids on my street. I charged twenty pence a show, so that's professional right? It was a paid!

The fact that it's different all the time. Making people laugh. Getting to find the humour in things that annoy upset or challenge you.

Getting to a gig in the sticks, to perform to ten bored looking people, for no money because you've been told it's a great 'development opportunity'.

From the audience response and how much I've enjoyed performing it.

It's a great festival and a great chance to meet new people and showcase your work.

I've not found that it is particularly. When I did a theatre show there two years ago the audiences were really lively, fun and supportive.

It'll all be alright. You are not alone... and stop drinking cider at bus stops with boys who you think will bring you the moon... They can't even spell it Love!

It takes years of writing weird shit, performing in bizarre places and developing who you before you find your voice as a writer... be prepared to go on that journey and have fun doing it.

I'll be performing at Pleasance Courtyard at 4.45pm 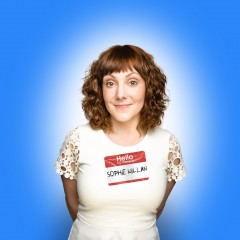