In the run up to Voice's latest coverage of the Edinburgh Festival Fringe, we have dozens of interviews with performers like award winning Michael Griffiths, who we'll be seeing up there.

I'm a singer from Australia back in Edinburgh for my fourth year in a row. The last few years I've performed Annie Lennox and Madonna tributes, this year it's Cole Porter's turn. 'Cole' explores his colourful life is a perfect opportunity to revisit all of his wonderful songs like Night and Day, Anything Goes, I've Got You Under My Skin and the list goes on..

My Mum was always a keen theatre subscriber and arts enthusiast so my sister and I were taken along the opera and ballet and Adelaide Fringe shows every year. It was very normal for us pursue the arts as a career (my sister is now a contemporary dancer and choreographer). My earliest memory was seeing Macbeth performed in a tent, completely in Russian (I didn't understand a word) and being sprayed with saliva as I trembled in the front row during all the soliloquies. It's a wonder it didn't put me off entirely!

Again, my Mum was always very encouraging. We had a piano at home and I gravitated towards it before I could talk and long before my feet could touch the pedals I would sit for hours playing it by ear. Seeing a production of West Side Story in the early 90s in my hometown was the catalyst for wanting to go to drama school and that was where it became a serious pursuit. For a long time I wanted to be a pop star. Happily now I'm pursuing a career with a little more longevity.

My first professional performance was a school holidays pantomime in a shopping centre and I was dreadful. It was long before I went to drama school and I was completely terrified but no-one complained about me and it was pretty awesome to get my first pay check. It was a good lesson early on to learn that it's possible to get paid for something that is also pretty fun to do.

The best thing is the satisfaction of being my own boss and the amount of people I get to share music and laughter with all around the world. I'm very lucky in that there isn't anything else I would rather do. Connecting and sharing with an audience is why we do it and I look forward all year to Edinburgh each August, it's a very special place for me.

The instability of it and the fatigue. It may look like I only work an hour a day when a festival is up and running but keeping show fit and on top of all the admin is very much a full time job. There's never the option of calling in sick either or taking a night off work here and there. You gotta love it when it works though.

There's a special feeling when a performer and an audience is completely in sync with each other, it's felt on both sides and it's part of the reason why we go to live performance. The amount of laughter and applause is always a pretty good indicator too. I used to aim for a performance without mistakes but actually a special connection to an audience far outweighs perfection.

I'm a massive Pet Shop Boys fan and would jump at the chance to do something with them. I've followed them for over 30 years and they still surprise and inspire me. Maybe it's time they wrote another musical and cast me in the lead! The would be an absolute dream come true.

Growing up in Adelaide, home to the worlds second largest Fringe Festival, Edinburgh has always been present as the ultimate challenge for a performer. If you can make it there, you can make it anywhere! What I was unprepared for was the beauty of the city and it's people and that I would fall hopelessly in love with it at first sight.

It's different in that you become utterly immersed. Immersed with your fellow performers comparing notes about fatigue, immersed on the streets with your audience dashing to another performance and immersed in shows to challenge and inspire you. There's also a ' marathon' element to Edinburgh that makes it unique so it's about pacing yourself and looking after yourself. No noisy bars at night for me, just a quiet drink somewhere and a bite to eat to unwind after a show.

Hang in there, it'll all be ok. At 16 I was terrified that my sexuality would make it impossible for me to live a happy and 'normal' life. 25 years later I wouldn't dream of wanting to be seen as normal and I understand there is no such thing. Doing what makes you happy is all that really matters and ideally you will make other people happy in the process.

Fake it till you make it! It was said to me a long time ago by a Broadway choreographer and I figured he was merely throwing away a rhyming couplet but the longer I'm in this business, the more I recognise it as wonderful advice. No ones starts out having found their unique voice, choose your influences wisely and keep at it until you find out where you fit. Persistence far outweighs talent in the long run.

I sure do! You can catch me on: 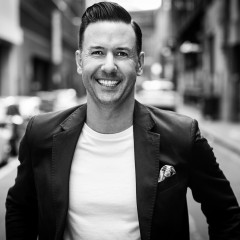 In the run up to Voice's latest coverage of the Edinburgh Festival Fringe, we have dozens of interviews with performers like award winning Michael Griffiths, who we'll be seeing up there.