In the run up to Voice's latest coverage of the Edinburgh Festival Fringe, we have dozens of interviews with amazing acts like Young Pleasance, who are taking Alice Unhinged up, and of course we will be reviewing!

With Edinburgh Fringe starting this week, all those performing are working extremely hard to get their shows ready for the public to view. I spoke to Phoebe, Jerome and Andrea from Young Pleasance to hear how their experience has been this year.

As of today, the Young Pleasance company have been rehearsing their play 10am - 6pm every day for just over a week. They received their scripts about two days before the start of rehearsals, although not all the parts had been cast when they started last Saturday. When I visited them, I thought they had been rehearsing for much longer, as those I saw seemed to know their lines fairly well already. They explained how it's more a case of learning as you go, and the whole play develops as they block it. This is obviously a very different experience to that most of us will have had at school or in drama classes, and Phoebe described it as a much more intense process. The set arrived in rehearsals on Tuesday and Stage Manager Jerome was pleased to see that the set is smaller than last year, which he described as a 'baptism by fire' into Stage Managing.

For those who are unaware, it is fairly rare to find a young company performing at Edinburgh Fringe. Phoebe and Jerome both said that it's rather overwhelming being a young company surrounded by so many older and potentially more experienced companies. Being at the Fringe is both extremely exciting for them, and rather exhausting. Phoebe described it as a great experience and a chance to open your eyes to different styles of theatre and performance. Of course, they also perform themselves and said it's an amazing experience because although they have to smash it everyday, they have the chance to improve and evolve with every show. Little things are constantly changing, so it's still as much fun on day 1 as it is on day 24!

The Young Pleasance Company is made up of 28 young actors and 2 young crew members. Andrea explained how this takes a lot of organisation and planning. The cast was actually selected in February and most of them guessed their parts from their costume fittings. They also have to organise publicity and transporting the entire company, set, props and costumes up to Edinburgh and back. This is a huge job and takes months and months of planning, even if the actors only experience the intensive period just before they travel up to Edinburgh.

Overall, it is clear these young actors are determined to make their mark at the Fringe, as they do year after year with incredibly professional looking shows that put some of the older companies to shame. With such hard work and dedication, they are bound to do well, and we wish them all the success for their time at Edinburgh Fringe this year. 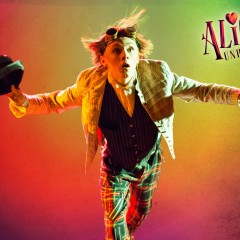 In the run up to Voice's latest coverage of the Edinburgh Festival Fringe, we have dozens of interviews with amazing acts like Young Pleasance, who are taking Alice Unhinged up, and of course we will be reviewing!